The Guild Wars 2 April 2014 feature pack (aka patch aka update aka the "new" shiny) hit clients this week and along with it Arena Net unleashed the MEGASERVER (yes; you have to type it in all caps because it contains the word MEGA).  Now, the technology has not enveloped all zones at this time, but a few zones got the early MEGASERVER treatment.  I was able to venture into the MEGA version of Brisban Wildlands and experience the technology first hand.  Here are my impressions.

"WTF!? someone just helped me back up"  The statement was odd for me to make in /map chat.  I had spent a lot of time in the Brisban Wildlands as of late eating dirt and it was fairly odd to have another player present to help me back up this time.  There simply wasn't supposed to be more than a few players in this zone at any given time and there certainly wasn't supposed to be any working on the event the same event at the same time.  Let alone was there supposed to be one there to save my warrior from a tough tangle with a veteran.

In fact, Brisban Wildlands was hopping.  It was a happening place, if such a thing means something.  I was absolutely in awe of the number of players moving through the zone and elated at the pace of events occurring.  My map was full of orange circles and rapidly depleting orange bars appeared in my notification area.

What kind of bizarro world was I in?  This wasn't Queensland!  This wasn't a living event zone!  This was the boring and forgotten Brisban Wildlands!  There shouldn't be anything more than those one or two newbie Asura players that don't know any better!  Truth be told I was learning very quickly that the MEGASERVER technology was at work ensuring my lonely adventuring was no more.

Color me impressed with the MEGASERVER.  It was my most anticipated feature with the patch (unlike the majority that were hyped on the wardrobe system which has turned into a complete mess post-patch) and it has lived up to my expectations.  It is a truly marvelous change for the game and Arena Net should make sure 100% of their effort is placed behind rolling this out to every zone in the game.  I can't help but believe there are players leaving every day because they get sick of boring game play in empty zones.  Dynamic events sell Guild Wars 2 and with zones full of people those events are almost always happening.

In conclusion, the MEGASERVER is MEGA awesome. 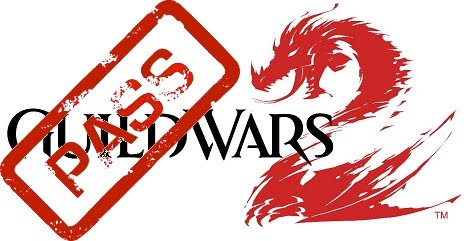 Posted by heartlessgamer at 3:53 PM No comments:

If this was posted on a April 1st I would have suspected shenanigans, but as it is now April the second and impossible for me to be tricked any longer I must declare that the Guild Wars 2 Megaserver is a real thing.  Traditional MMO servers are gone and in their place is one super megaserver that will host all users via various instances of each zone.  World vs World vs World will still be separated along old server assignments.  This is an exciting change for Guild Wars 2.

First it is worth noting that this is NOT equivalent to EVE Online's single universe.  In EVE there is only one copy of each "zone".  In Guild Wars 2 (GW2) the world size is limited so there will be copies of each zone which will be referred to as instances.  It would be crazy to even think about all GW2 players being stuck in the same tiny maps.

The biggest benefit to this systems is that lower popularity zones will now be more populated.  As I've recently returned to Guild Wars 2 after a hiatus from video gaming in general (and this blog if you've noticed my lack of 2014 activity) I immediately noticed how few folks were in the starting and mid-level zones.  Aside from the "champ trains" rolling over Queensland I was pretty much flying solo on my warrior and necromancer on the dynamic events.  That certainly doesn't feel massive or multiplayer.

The apparent downside is trying to get grouped correctly with your friends and guild mates, but Arena Net seems to have some plans to avoid this problem.  Players will be able to join parties and then get placed in the same instance of a zone as their fellow party members.  The overall system will aggregate data on players such as language preference, playing habits with guild members of friends, and every time a zone is entered those variables will be weighed to hopefully place the player in the most logical instance.  For a solo player like myself this won't really matter other than the fact I may actually see a friendly face and get to complete some of the harder events in the less visited zones.

There is a great chart from Arena Net's testing of the system showing the increase in player activity per map instance (yes that is +225% for each map instance on average):

Tagging along with that this addresses one of my biggest heartaches with Guild Wars 2 and it's dynamic events system.  So much of my playing time was spent in the same zone because that is where the players were and that is where the events were being chained together.  It was a terribly boring existence in almost any other zone.  Now at least there is hope that every zone will be packed with players as I suspect worldwide there will always be a good number of folks looking to be in every zone of the game.  It will be very cool to experience a new trip to level 80 on my new characters than what I experienced last time I leveled to 80 by literally never moving outside of Kessex Hills and Harathi Highlands.

The most amazing part about this change is that it is not the only big change happening for Guild Wars 2 this month.  There are several big system changes slated for the April 15th patch.  It is indeed an exciting time to be playing Guild Wars 2 (though I still maintain the combat is crap... but I can still have fun with it).
Posted by heartlessgamer at 3:39 PM No comments: