I have played Magic the Gathering (MtG) on and off since the 1990s.  I began around the time the Portal starter sets and Tempest card-set (part of the Rath Cycle).  To this day, the Sliver cards remain some of my favorite.  Post 2002 I shifted from paper to MtG Online (MTGO) as my gaming habits moved from physical games to the digital space.

About this time my gaming focus became dominated by MMOs and my MtG cards were boxed (digitally and physically).  For years my only interaction with MtG was to wax nostalgic at players in my local game store while I played the new hotness of the moment (Dreamblade, World of Warcraft TCG, The Spoils TCG, etc).  In the late 2000s, MtG: Duels of the Planeswalkers (DotP) made its way onto the PC and it drew me straight in with the promise of a better interface (MtGO was not the best digital representation of the game at the time) and limited decks (i.e. you didn't have to know how to build a deck; you just focused on playing).

DotP was followed by additional versions in 2012 and 2013 and that annual trend of a yearly Duels versions continued in 2014 and 2015.   Each bringing a couple more features and continuing to nudge MtG into the digital realm further and further.  Duels was very much a quick to play version of the game that limited deck building so the focus was on playing the game.

After 2015 a shift was made to Magic Duels which was as close to paper magic as it seemed that Wizards of the Coast (WotC) was willing to get (remember, MtGO has been in existence since 2002!).  It featured its own unique rules (differing it from paper MtG) and there are over a thousand cards, deck construction, in-game purchases of cards, multiplayer modes, and a slew of single-player modes to play decks against the computer.  It seemed like Magic Duels was the go forward strategy for the casual player (specifically mobile gamers) in place of annual DotP releases.  It was the happy middle ground between MtGO and paper.

Then up comes MtG Arena, a new digital offering that is 1-for-1 with the paper game rules and a plan to have simultaneous releases for new card sets going forward (cards will be limited to sets in the current Standard block as to avoid the idea that Arena is replacing MtGO which supports almost the entire MtG library).  Arena features a slick new user interface, speedy games rules engine, and a slew of bonuses for streamers to stream games via platforms such as Twitch.  Players can buy booster packs, play in sealed/draft events, construct decks the same as they would in paper, and there are discussions of opening the door for non-Standard game types (such as Singleton).

All of this to say; I am playing MtG Arena and I have some thoughts on it from the Open Beta.

The first thing that struck me about MtG Arena was the ease at which a new player can get into a game.  In fact; the game drops the player in a series of tutorial games before they ever see an options menu.  This feels like the right move as once a player is on the main menu they are on to playing competitive games against real players or dropping into a Deck Editing screen for a fairly complex game.  The current Standard block for MtG is no slouch when it comes to variety of mechanics and card interactions (heck there are keywords and card types I wasn't even aware of)!

The second feature that jumped out was how smoothly the game plays.  The games rules engine (being called GRE in the community) is a work of art and is supposedly built to read and interpret card keywords and rules and thus be able to adapt to any new cards added to it without having to program how each individual card should work.  The end result is a very quick to play game that handles one or a hundred token creatures with ease.

With that efficiency comes a problem though.  There is no way for a new player with no MtG experience to have any chance to understand what the heck is going on during some of the more nuanced parts of MtG.  The "stack" is fully and faithfully represented and players will spend time going card by card, effect by effect through it.  In many cases a new player will barely have the time to be able to read the rules text on some of the more common cards before they are overwhelmed with a "stack" of card effects waiting to be resolved.  Throw an Enchantment - Saga or a Planeswalker at them and good night my dear new player.  One of the things DotP did well was to limit some of the more complicated combos making it into the game and thus ensuring a new player didn't have to fret over some of MtG's more nuanced possibilities.

With that said, MtG Arena is clearly aimed at the serious MtG player.  While the game has cleaned up many of the laborious parts of MtG to make it bearable on a stream it has done nothing to eliminate the high complexity that is current state MtG.  MtG has 20+ years of development behind it and every new set digs into that backlog to bring forward bits and pieces.  This what makes much of the current MtG scene so exciting, but is also what can make it really, really hard to get into.  What is good for the veteran is not always good for the new player.  In paper MtG this is mitigated a bit by any number of custom play variants so I am hoping that Arena is able to execute on some more play modes to help step new players into the game (for example; a mode similar to Magic Duels where mythics, rares, uncommons are limited in a deck).

Now for the experienced MtG player; Arena is the dream digital representation of the game.  I cannot emphasize enough how well it handles the "stack" and walks the player through it.  Its not perfect (I would love to have a bulk resolve option for big stacks where no action is being taken), but it is light years ahead of any other digital version I have played (and from what I can remember of MtGO it puts it to shame).  Arena also does a great job of reflecting chains of effects; where they came from, what they are targeting, and if they tie into the stack somewhere.

Anyone that has read my "Why Artifact has me excited" article will note that I was excited by the Richard Garfield statement about Artifact supporting any number of cards on the digital table at once.  I reaffirm my statement here.  Arena is great at handling any number of cards on the table at once.  I have played games with 30+ token creatures out at one time and it was easy to manage and didn't bog the game down; that is unless you get into effects that add an item to the stack for every card (see next paragraph).

Resolving large quantities of effects/cards in the "stack" can be a problem as there is no bulk option.  Players have complained of being "timed out" and thus forced to concede a game because it was taking too long to make assignments of blockers (which I can see happening with some of the token creature generating decks that are out there).

Also having an audit log of cards/effects played would be useful as it is easy to click through whatever may have just been played and it can be hard to reverse engineer (just last night I had an opponent down to 1 life and the next turn they popped back to 16 and I have no idea how or where they did it even after exhausting a time out to read through all cards/token creatures they had in play).

Another area I would like to see Arena improve is the portion outside of playing the game.  There is no way to go back and see the last card or pack of cards you opened.  A stray click and it is easy to miss the rare/mythic you just received.  A "most recent cards acquired" log would be A+ awesome.

A big gap seems to be the inability to add or play casually with friends (something Valve is advertising as a differentiator for their upcoming digital card game Artifact).  Currently in the open beta for Arena players can only compete in competitive modes (single game ladder, best of 3 matches, special events, or buy-in sealed/draft formats).  Along these lines you cannot talk with other players or send them messages.  While this cuts down on the need to police such transactions it really kills the social aspect of the game.  I would love to be able to ask some of my opponents on how they built their deck, why they played a card in such a way, or to just pass time.

The deck edit screen also needs a lot of love.  It feels like it was built for a mobile user instead of a PC user.  Simple features such as hovering over a symbol to see what it means or "do you really want to remove this card from your deck?" messages are missing (seriously; whoever designed the Edit Deck screen to remove a card from your deck when clicking it should be shot... I click things because I want to see them!!!!).  This goes back a bit to the new player experience with MtG Arena.  I would be so pissed as a new player if I clicked a card to see it in my deck only to have it be removed and not having the knowledge to add it back. There is also ZERO explanation anywhere of what the symbols mean when trying to filter cards (fine for the experienced, terrible for the rest of us).

The jury is still out on other aspects of the game such as card acquisition rates, cost compared to paper, and the ability to stay "free 2 play" as a player.  It will be interesting to see in the long run how players feel about having their monetary investment in the game go to the wayside as card sets cycle out of Standard.  It is also not clear how a player that takes a break can quickly get back into the game at a later date without an expensive buy in (right now you get 10 starter decks through the New Player Experience).  I am hoping they will provide starter decks for new expansions at a discounted (or free) rate for returning players.

In my view; Arena is a natural progression from Magic Duels.  It takes the final step to put MtG into a modern digital format.  The game plays like a dream, the streaming integration is top notch, and all the cards and deck building capability that Duels/DoTP lacked is present.  The hardest of hardcore will continue with MtGO but for the on again/off again player such as me Arena will be the best option.

I have been playing a mono-white deck that I've pieced together from the few booster packs I've earned and the starter decks.  I also cashed in a few wild cards (MtG Arena's way of allowing you to pick a card instead of playing the booster pack lotto forever).  I'll post the deck if time permits.

I am currently playing open beta under "heartlessgamer" (not that you can add me).

And a quick shout out to my favorite card of the week: 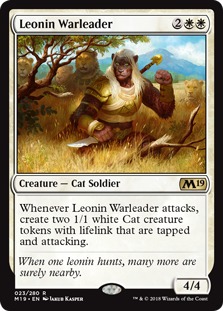 Posted by heartlessgamer at 3:28 PM No comments: