Theros Beyond Death is here (not beyond death).... let's brew!

Murdered titles aside; Magic the Gathering's latest set, Theros Beyond Death, is here and available on Arena.  With a new set comes new deck brews.  I will state up front that I am a net decker in general (i.e. I copy decks of the Internet), but with new sets I'll happily take some of popular decks and see if I can slot some of the new cards in to brew up something a little fresher.

I tend towards aggressive decks on Arena since they are most often the least rare/mythic reliant.  I love more control oriented or tempo based decks, but my current Arena position does not allow for me to craft those decks.  With that in mind I first looked at the classic red aggro decks that are popular at the dawn of every set (aggro decks tend to do well early on as other decks are not yet refined).  I didn't find anything that drew my attention so I looked at white weenie decks and struck out there. 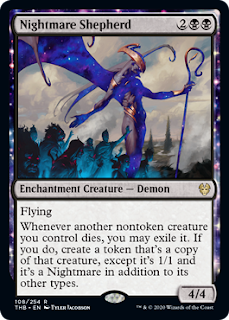 Then I stumbled onto folks playing with Nightmare Shepherd in mono-black decks focused on devotion win condition with Gray Merchant of Asphodel (affectionately known as Gary).  The core of the decks seemed to be the Cauldron Familiar/Witch's Oven sacrifice engine from the previous metagame featuring cards such as Ayara, First of Locthwain and Priest of Forgotten Gods to make the sacrifice and recursion of the cats pay off.

This got me thinking about what else would be fun to sacrifice to trigger Nightmare Shepherd and I immediately went looking for "enter the battlefield" effects and that brought me to one of my favorite cards from a previous discard deck; Yarok's Fenlurker.  Fenlurker was an upgrade to the previous use of Burgler Rat in discard decks as its an equal effect with an upside.  Fenlurkers upside looks even better now with Nightmare Shepherd and the devotion win condition with Gary.   A quick glance at various decklists on some websites confirmed I wasn't alone in this thinking. 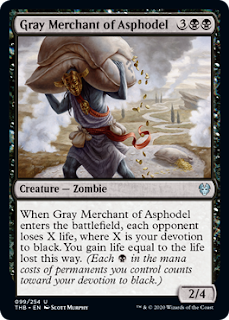 Looking further I wanted to take the concepts here even further and started to look for other cards that supported the brewing theme around sacrificing and getting things back in return.  This brought me to Kaya's Ghostform which I had remembered from a few draft runs where I kept ending up with multiple copies of it.  It paid off in a few draft games so I threw it in here to help bring back more fodder for the sacrifice.

I filled the rest of my modest brew in with the curve from other mono-black devotion decks I am seeing online (the fill ins were pretty straight forward black staples; Knight of the Ebon Legion, Murderous Rider, etc).

Here is what I landed on and hope to get around to crafting for Best of 1 play:


Unfortunately it will be a bit of time before I get to play it as I am planning to build my collection via draft and not spend wildcards at this time.  We'll see how the meta shapes up and if there is any competitive legs to mono-black devotion sacrifice.
Posted by heartlessgamer at 1:46 PM No comments:

Email ThisBlogThis!Share to TwitterShare to FacebookShare to Pinterest
Tags: Magic the Gathering


This was one of Fantasy Flight Games (FFG) ventures into unique games (the other attempt being Keyforge). Stealing FFGs blurb: "Every copy of Discover: Lands Unknown is unlike any other in the world. A mix of environments, storylines, characters, locations, items, and enemies have been engineered to tell a story unique to every copy of the game thanks to an algorithm that ensures no two copies are alike."

First up; Christmas has come and gone and with it so has a slew of new board games to give a try. Here are some thoughts on a couple. 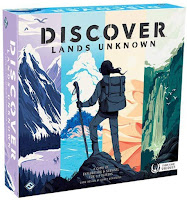 General critical consensus seems to be that Discover: Lands Unknown was a flop, but I found the game to be engaging and enjoyable while delivering on its core mechanic of a survival experience.

In my first game I lost a fight with a bull moose and watched from the sideline as my wife and oldest son survived onwards before starvation nabbed them both in the middle of the night.

Better oriented in follow up plays we were more successful as a party of survivors.  Keeping supplies of food and fresh water are key; crafting flint to start fires is also a good idea.  Weapons are helpful, but combat (other than if required by your unique scenario) is better avoided (as evidenced by my scrap with a bull moose).

One aspect that I found interesting (but did not explore while playing with my family) was the potential for players competing with each other.  As far as I can tell there is no overt direction by the game that players should cooperate, but it does become apparent that survival is easier together.  With that said the game puts players in interesting positions to overtly (or covertly) compete with each other.  It could be as simple as the elected Tribal Leader moving a monster towards one player vs another or one of the players holding off on crafting a key item so the rest of the party can't get access to it.  In the Tribal Leader case it is an overt act and this can kick off a debate at the table of whether a change at Tribal Leader is warranted.  In the crafting case it is a covert action; other players do not know what project cards you may be holding and is easily played off as though you don't have resources to craft it yet.  I imagine in other scenarios there may be more of a drive for players to compete directly with each other and there is a "Scenario 5" that I believe is designed around replayability and meant to be the player vs player scenario.

My only complaints for the game were that initial set up takes longer than I'd like and there is some hunt and pecking in the rule book. Also the "quick reference" sheet that is the most helpful rules reference is on the back of the scenario sheet which was not obvious at first.  In later play throughs all that we needed was that quick reference.  And good news is that once everything is sorted and the players better understand the reason for the setup it goes much faster.

I suppose the more we play the game we may exhaust the two scenarios that came with the game, but I suspect by the time we get there we will be done with the game and personally I find it interesting that we could get a used copy that would deliver a brand new and unique adventure (even though many reviews note there is not that much difference form one copy to the next even if the components are different). 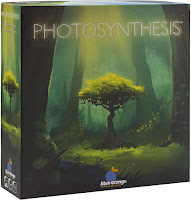 The second game gifted over the holidays was Photosynthesis.  This has been on my list for a while.  As an avid gardener the aesthetic of this game spoke to me.  The green, orange,yellow, and blue of the trees looks great on the table.


The game falls into the "easy to learn, hard to master" category.  Other than punching a lot of cardboard set up is a breeze.  The game plays quickly as well and boils down to a simple loop of "plant seeds, grow trees, collect points, THROW SHADE".

That last bit about throwing shade is where the "hard to master" part comes in.  Players really have to think in three dimensions and future planning is well rewarded.  Where trees are planted, when they are planted, and what stage you are going to grow them to while the sun rotates around the board offers an amazing array of choice.

Do you want to shade your opponent out or take that fully developed tree off the board to score the points?  You could grow that tree, but now it shades your other tree for two turns which will leave you a point short to score a bigger tree.... BUT in three turns it will shade out your opponent for the next four turns!

The game plays fast (excepting the chess-level thinkers out there) and has won an immediate place in our family's rotation of games.

This is one from the bargain bin at our local Ollies (#olliesarmy represent!).  High Command is a card drafting game set in the Iron Kingdoms setting of Warmachine.  I would best describe it as a drafting version of Smash Up for folks that want the Warhammer 40k aesthetic instead (yes I said Warhammer damn it!).

Players pick a cross selection of cards to play (like picking two factions in Smash Up) and then slowly draft them into your discard deck so you can eventually shuffle them back into your draw pile to get and play.  There are also war casters that sit on the sideline waiting to be rushed in for a single glorious predictable turn before being removed from the game.

As you may be able to suss out by the snarky review I was not impressed by the game.  The cards are a mess.  The text is tiny, iconography is horrible, and over all plays is a slog. The best part is the random end to the game which can occur at any moment once the game progresses to the "stage 3" event cards that represent the turns.  Do I have one turn?  Two?  Who knows!  Throw in locations that benefit a specific faction only (and it sure is likely will be your opponents) and its lovely.

The good news is my oldest son likes loves the game and the second core set Faith and Fortune was only a few bucks as well at the good ole Ollies so I'll be enjoying this one for a while apparently.  I hope he never reads this blog...


Posted by heartlessgamer at 5:36 PM No comments: