I have been getting busy in Minecraft on our new beta server.  I found an awesome cliff side to hollow out and then I replaced the cliff face with a giant wall of glass.  Here are some pictures I took during the process:


Next on the agenda:

1. Pick a good name for this base.  Any suggestions?
2. Make super secret entrance and remove old boring entrance.
3. Set out to "cool ass rock formation" and build our server's minecart track switching station.  We are building a more manual, switch-based station this go around to avoid the maintenance automated systems require.
4. Fill up all this empty space with a cool multi-level platform (think scaffolding that will be there permanently).
5. Destroy monster trap outisde base and build a new one on top of mountain.  Funnel new trap loot into base.
6. ????
7. Profit!
Posted by heartlessgamer at 1:40 PM No comments:

In The Year 2011, Heartless' Predictions

will maintain its dominance.

2. Free 2 Play will continue its march forward and many will consider 2011 the year that F2P becomes the dominant business model not only for MMOGs, but for any online game (MOBA, FPS, etc.)

will NOT launch this year.

4. The "next generation" Xbox

will be announced by Microsoft. Nintendo and Sony will stay with their current generation.

5. This blog will be completely different and may actually feature commentary and experiences from games I'm actually playing.
Posted by heartlessgamer at 1:47 AM No comments:

PC vs Console... an image

Posted by heartlessgamer at 1:15 PM No comments:

What I bought in the Steam Holiday Sale 2010

The Secret of Monkey Island

Yay, I still have $6.25 left to spend on non-gaming items!  And damn it, how did I miss Puzzle Quest 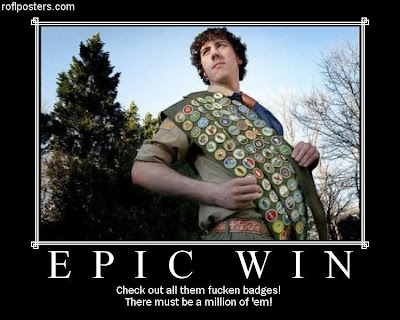 Posted by heartlessgamer at 11:16 PM No comments:

Thanks to this post over on Reddit, I just scored a copy of Battlefield Bad Company 2: Vietnam

for $5 via the UK EA Store.  The code is redeemable on the US version via Steam.  And after a single game I am convinced it was well worth the $5.  Merry Christmas to all and to all a Good Morning Vieeeeetnaaaaam!
Posted by heartlessgamer at 1:49 PM No comments:

Sorry, no part 2 for Minecraft What I'm doing

Sorry, there will be no part 2 to this post about what I was building in Minecraft.  As the beta approaches for Minecraft, tomorrow actually, my friends and I decided it was time to go all TNT Armageddon on our server.  And, well, my house was first and is now nothing but a giant hole in the ground.

Normally, a month of hard work lost in a few heartbeats would cause a rage inside me that most have never seen, but with Minecraft things grow stale.  Also survival multiplayer has been updated so much that when I started my project the game was immensely different than when I left off (players NEVER finish anything in Minecraft).  I'm looking forward to starting over with all the awesome knowledge I have now.  This time, I may actually fit my mine cart system in my initial building instead of some sort of Frankenstein building that I was building on the old world!

A new world dawns tomorrow at minecraft.gamesnacks.org.  Come on over and say hi.
Posted by heartlessgamer at 8:22 PM No comments:

First game of League of Legends

?  I think I did fairly well.  We won the match even though we had one player AFK nearly the entire match.  I played as Ashe, who I am liking (following this guide). 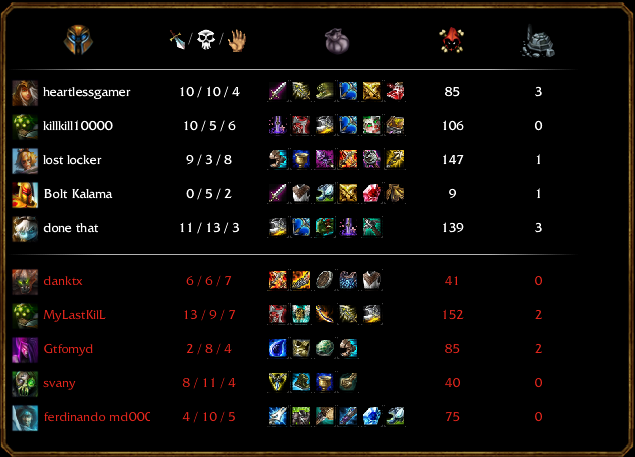 Posted by heartlessgamer at 1:29 AM No comments:

Email ThisBlogThis!Share to TwitterShare to FacebookShare to Pinterest
Tags: League of Legends

Yes, I am playing League of Legends

If you've been following my Raptr stream, you may have noticed that I've started playing League of Legends

(LoL).  LoL is a strategy game based on the concepts of the Defense of the Ancients (DotA) map from Warcraft III

.  Players pick a champion and battle an opposing team and their defense towers, NPC minions, and an NPC filled "jungle".

However, one sentence is not going to describe this game adequately.  It took a 48 minute long video for me to finally grasp the possibilities that lie within this game.  And there is nothing like a crazy British person to introduce you to a game with the acronym LoL:

With the video out of the way, here is my pertinent info:

Now, I've only played practice matches up to this point against AI bots. The community from all reports is unforgiving of newb players. The game is designed so that a bad player really hurts a team. A player that repeatedly dies without accomplishing anything is in reality "feeding" the other team and allowing them to increase their power and control of the game.

I suspect that I will be coming out of practice mode soon, because there are some things I won't learn until I am playing the real game. Also, I need to climb the leveling ladder to 30 which will never happen just running practice games. Leveling is a player's learning period, so I need to take it serious instead of just rushing to 30 because a level 30 newb has no excuses as to why they don't understand the game.

Oh and did I mention that the game is completely free to play?  No?  Well it is and most of the extra parts of the game can be unlocked for free as well by just playing.  The items that can be purchased in the cash shop are cosmetic or allow for players to skip past a bit of grinding in game points to unlock the various champions.
Posted by heartlessgamer at 7:12 AM No comments: