News today via a post on the Star Wars: The Old Republic

forums that SW:ToR will NOT require Origin.

That's good news for anyone planning on playing the game.

That's bad news for EA that they can't even get their flagship title to promote their system, but at the end of the day maybe not losing sales is a better prospect.

That still means no SW:ToR on Steam (or any other digital distribution system other than Origin).
Posted by heartlessgamer at 10:47 PM No comments:

Wildstar was announced at Gamescom this week. Today an eight minute gameplay video was released and IT WAS BORING. But don't let me make that decision for you, watch the video below.

I was brought this video by this post on Rock, Paper, Shotgun (RPS). The first comment fits directly in with my thoughts and even though Wildstar's footage was boring, it was not nearly as boring as the SW:ToR footage we saw from Gamescom.

Looks like a pretty traditional MMO with some next gen elements.
Like dodging.
And making bear men explode.

Yeah, I think I’ll be getting this. This game is what SW:TOR wants to be but is not.

To back up my thoughts, the one and only RPS regular, Jim Rossignol, chimed in the same idea. 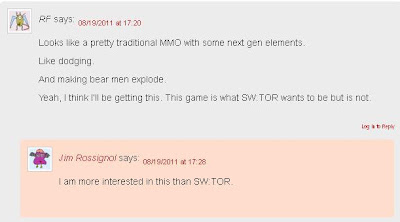 Posted by heartlessgamer at 1:47 PM No comments:

Bioware: This Video is BORING

Bioware needs to step up their game with Star Wars: The Old Republic.  The below video is the most recent propaganda from GamesCON and its absolutely boring.  Is this really the advertising they want for the game?  We saw a group of players run up to static groups of NPCs, STAND ABSOLUTELY STILL, while the healer healed, the DPS did damage, and the tank tanked. Epic combat?  Action?  Where the hell is it Bioware.  I fell asleep watching this video.

Posted by heartlessgamer at 11:37 AM No comments:

Email ThisBlogThis!Share to TwitterShare to FacebookShare to Pinterest
Tags: SW:ToR

Warhammer Online: Wrath of Heroes was just announced at GamesCON.  It is a 6v6v6 multi-player online battle arena game (MOBA).  Oh and its free to play (F2P).

This has me mildly interested, mostly because its F2P.  I enjoyed Warhammer Online for what it was: a RvR game.  I didn't enjoy Warhammer Online for what it could have been: an instance-heavy RvR game that was consistent with it's path from start to finish.  Unfortunately WAR split it's focus and by the time launch rolled around, it was a bucket full of holes that held water for only so long before being drained. 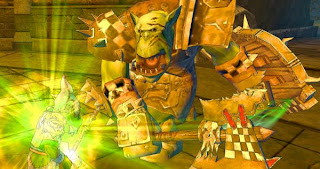 Wrath of Heroes extracts the RvR and compacts it into an action-oriented mash up.  It is a play for the MOBA market that League of Legends currently dominates and that DOTA2 is currently doing a money grab for.  Fortunately, there is plenty of demand and I cannot fault Mythic/EA for putting their foot into the door.

I will give it a try when it comes out or if I get invited to Beta.  That is unless it requires Origin.  Not really interested in getting involved with yet another digital distribution platform.  Sign up for beta on their site.

Posted by heartlessgamer at 2:01 PM No comments:

A couple DOTA 2 screenshots for everyone: 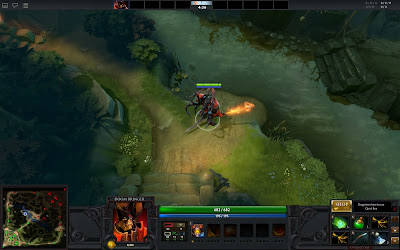 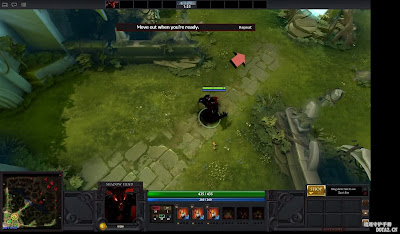 Posted by heartlessgamer at 2:22 PM No comments:

Email ThisBlogThis!Share to TwitterShare to FacebookShare to Pinterest
Tags: DOTA 2

I'm not feeling very creative lately.  So, another image to sum up my thoughts on the new Counter Strike game.

Posted by heartlessgamer at 2:36 PM No comments:

Clearly this man is not a fan of Blizzard's plans for Diablo III.

But I bet anyone $5 and that day old burger wrapper in my car that Blizzard is thinking: 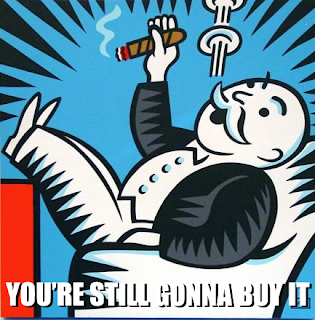 Posted by heartlessgamer at 9:25 PM No comments:

My real thoughts on Diablo III's RMT and DRM

Blizzard has certainly stirred the pot with the announcements for Diablo 3. For those of you out of the loop, read this and this.

I have the same problem with Blizzard doing this as I had with SOE doing RMT auction houses: it brings in to question the developer’s motives. When the developer isn’t dipping their hand into the pot there is a barrier of plausible deniability. As soon as the developer takes a cut of the RMT-action, questions are raised like will they make changes based directly on activity in the RMT auction house? How liable are they if the value of an in game item changes due to a patch? There are a lot of questions unlikely to be answered by Blizzard on this topic. 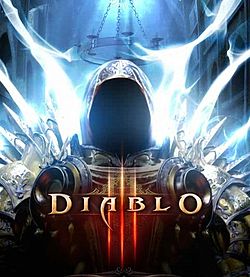 One benefit to Blizzard sanctioning the RMT is that it brings the practice into a safe environment for those players willing to partake. The RMT is going to happen whether Blizzard allows it or not, just as it did in Diablo II, so it is better they manage it. It also allows the power-gamers (aka core gamers) to profit off their excess of play time which can be a motivating factor to keep playing the game. The only question is how effective Blizzard is at curtailing bots and other illegitimate farming methods that would undercut the market.

Blizzard has done a good job defending it’s decision to go the RMT route, but I do have a serious bone to pick with one of their quotes. Rob Pardo said:


"What’s the difference between a player that plays the game a lot and a gold farmer? They’re really doing the same activity. If you are doing an activity where all you’re trying to do is generate items for the auction house, you’re not making someone else's game experience poorer. If anything you’re making the game better, because you’re generating items for the auction house that people want to purchase.”

The first part is naive and I sincerely hope Blizzard realizes the sweatshop-like nature of most gold farming operations. Gold farmer is a term applied to those who are forced (by circumstances) to make a living by farming gold. Gold farmers are NOT players.

There is a little truth to the second part of the quote. Diablo III is not a traditional MMO. This is NOT World of Warcraft where certain zones are nigh-unplayable due to the infestation of gold farmers. Multi-player and single-player will be played in 100% instanced maps and only with those people the player chooses to play with, so the game-play effects of farming are eliminated.

To note: hardcore-mode characters will NOT be allowed to use RMT since it features permadeath.

Diablo III does require a "constant" Internet connection for Battle.net authentication to play the game. There is no offline play, even if a player previously authenticated.  Here is Blizzard’s justification:


“We thought about this quite a bit,” says executive producer Rob Pardo. “One of the things that we felt was really important was that if you did play offline, if we allowed for that experience, you’d start a character, you’d get him all the way to level 20 or level 30 or level 40 or what have you, and then at that point you might decide to want to venture onto Battle.net. But you’d have to start a character from scratch, because there’d be no way for us to guarantee no cheats were involved, if we let you play on the client and then take that character online.”

“Now, that doesn’t mean you can’t play a game by yourself – of course you can. You can go into and start any game that you want, you’ll just be connected to the Battle.net servers, and we can authenticate your character.”

This is a legitimate defense and with the RMT auction-house, a requirement. I support this and I’ll make the comparison to my experience with Borderlands

(aka Diablo with guns). I stopped playing Borderlands (PC) online because of the rampant cheaters who hacked their characters offline. Borderlands co-op was, in my opinion, unplayable due to the cheaters.  I would have loved to see Borderlands online play secured in some fashion.

The leading part of the statement fits the Blizzard style as well.  Blizzard has always striven to remove confusing barriers to entry for their games.  While the average reader of this blog would not be confused about online vs. offline characters, I can see the viewpoint with the type of person that would be willing to quit over it.

The lack of offline play is a bit disheartening, but Blizzard’s justification does have merit. It will provide a better end-user experience for those looking to play multi-player, which Blizzard seems to be the most focused on.

For the RMT auction house it’s all a question of perspective. Characters fat on RMT purchases will be allowed online just like any other player and some gamers will view RMT as cheating. A few years ago, RMT was salt rubbed into the wounds of online gamer’s everywhere. However, in today’s world of the free to play revolution, the “paying to win” mentality is not as frowned upon. There are still those that are aggravated by RMT, but that crowd is dwindling as the market adjusts.

I really think we need to go back to Tobold’s thoughts about EVE’s debacle where he supported CCP (EVE’s developer):


...when the CEO of CCP recently commented the uproar of the EVE community on a similar issue with "I can tell you that this is one of the moments where we look at what our players do and less of what they say", he was completely right...

There is a furor online about these announcements and due to this some gamers will NOT buy the game.  Blizzard is going to be watching what player’s do, not what they say, and I suspect most of the complainers will be buying the game anyways. Summed up best by: 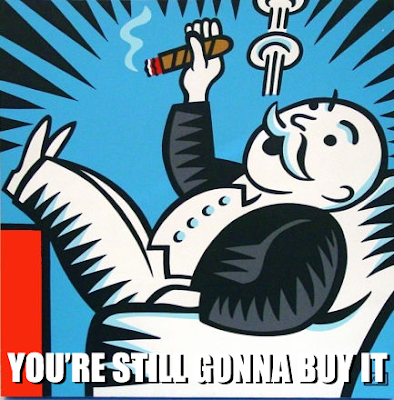 If you disagree with the road Diablo III is taking, DO NOT BUY THE GAME.

Personally, it’s not on Steam, so I’m unlikely to buy it.  I really despise having to have more than one digital distribution platform.
Posted by heartlessgamer at 5:57 PM No comments:

Shut up about Diablo III and Blizzard

I realize this is very shallow commentary, but I've found the simplest explanation is usually right. As gamers when we look back and we ask ourselves why Blizzard would introduce two of the most unfathomable things in PC gaming, always-on online DRM and real money trade (aka RMT), we can make a simple reply: because gamer's voted with their wallets and bought Diablo III. In fact, gamer's will probably scoop it up faster than my toddler scoops up TV remotes left on the living room table.
Posted by heartlessgamer at 7:23 AM No comments: