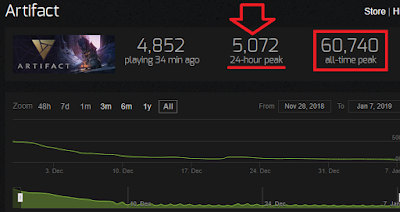 It is no secret that Valve's new game, Artifact, is struggling; down from a peak player count of 60k at launch to just a bit over 5k a month later (a 90% drop).  The question is why? What's wrong with the game?

Prior to the launch of the game the big areas of contention were around the business model; you have to buy the game, you have to buy tickets to play in prize modes, and there is a market to buy/sell cards.  The leading argument is that in a free-2-play world no one wants to pay up and thus Artifact is struggling. However, I would like to posit that maybe there is a different reason.  Maybe Artifact isn't any fun.

I defended Valve's approach to Artifact with a pay-up-front and pay-to-play model.  I still defend it.  I dropped $50 into Steam to spend on Artifact and early on I paid in happily for cards I wanted and tickets/packs I needed for game modes.  This was on top of paying $20 for the game to begin with!  As there are free modes for folks to play in the "buy an event ticket to enter" modes were just another option.  An option, in my opinion, that brought serious competition as no one was buying in without something on the line.  Combine that with the skill-heavy game that Artifact is and you have a recipe for a desirable competitive experience.

However, what I hadn't calculated in my early splurge of spending is that Artifact is, at it's core, not much fun to play.

Cards represent actions and units within the game, but much of the rest is set up through the magic of a computer.  A paper version of this game would never exist. The sheer amount of random elements would bog a physical iteration of the game down to the point it would be unplayable and I have a hunch that any card game I wouldn't want to play in the real world is a card game I wouldn't want to play digitally.

A game of Artifact starts by a random placement of key cards on the battlefield.  Your three starting heroes are placed, at random, in a starting lane.  They are joined by randomly assigned creeps.  Your opponents heroes and creeps join the battlefield in the same random manner.  Then each hero and creep has a chance to randomly decide the direction of their attack if they are not opposite an opponents creep or hero.  Following this you are dealt a random hand of cards and a toss up on who goes first.

The first act a player takes in a game is triage which I've found to put me immediately on edge. I had little say in getting to this stage outside of showing up with a deck.  There is no mulligan for the cards I drew and more importantly to me there is no mulligan to redo initial hero placement.  In most card games there are no cards that start on the board and the most random element is your starting hand which in most games allow for a mulligan to get a chance at a more favorable start.  Artifact is basically starting the players on turn six of any other card game with no chance of influencing how the game state was derived.

The game is only possible via the magic of a computer.  A paper version of this game would never exist. The sheer amount of random elements JUST TO START THE GAME would bog a physical iteration of the game down to the point it would be unplayable.  If this was a physical game it is very likely the game starts with a blank board state and the players drive each step of set up.  There is no reason not to take this approach in a digital game.  I cannot emphasize how NOT FUN it is to watch a game play itself before turning it back over to you as the player.

This would be recoverable if the game beyond the random set up offered some excitement, but the turns beyond that initial set up are equally sprinkled with randomness.  But at least in subsequent turns the player gets to decide the lane placement for heroes joining the fight!  Well excpet its still a random placement within the actual lane.  It may be a game winning drop into an open spot or it may be a flop into a death trap.

The crazy thing is the random elements really don't feel game breaking or game deciding.  There is a ton of opportunity for player skill and it delivers a neat puzzle each turn which fires the thinking side of the brain.

Unfortunately the options for solutions to those puzzles are not that interesting.  Item card (assuming you get past the random shop options); little impact when played and have to activate it later.  Modify a hero with a couple stat points?  That's anti-climatic.  Play a creep to fill a spot and watch it randomly decide a direction to attack (hope it was the one you wanted).  That creep may be useful.  Activate an ability on a hero that likely does nothing.

About the only cards of substance are spells and only in the few cases where they actually have impact.  The majority are of little impact to play (like literally just change the direction of an attacker... which was randomly assigned in the first place).  The ones that are fun to play are pretty much no fun for your opponent and thus are what some may call "overpowered".  Take Annihilation for example; wipes an entire lane of all heroes and creeps,  That's fun!  Because once its not your turn you have no counter-play opportunity.  You just sit back and take whatever your opponent plays and if Annihilation was the play THEN THAT'S WHAT YOU GET.

No, I don't want to argue for "counter spell" in Artifact, but I do want to argue that there should be just as many fun and interesting options to react to the "overpowered" spells as there is in casting them in the first place.  Artifact is an asynchronous game with players passing turns back and forth with no interaction whatsoever with your opponents turn.  That is fine, but if the most boring of items, hero, or creature abilities are going to require two turns to realize and thus allow for maneuvers to get out of the way then the game-ending spells should also allow for some creative game play rather than just taking it up the butt each turn against mono-Blue decks.

Ultimately what I am trying to drive towards here is that Artifact is NOT fun because it never feels like you are in control of playing the game.  You are at best watching a series of events unfold and pulling some levers to control each scene.  Playing a card on a hope and dream it does what it is supposed to isn't much fun.  Sure; getting counter-spelled in other card games isn't any fun but at least I know what my cards will do if they make the table.

Also most other digital card games represent things as cards.  Artifact can't even do that.  Cards turn into little flying discs if they are improvements and cards that are hero items disappear into little boxes on the hero cards they are played on.  Is it too much too ask to show cards as cards?

I hate that I don't find any fun in Artifact.  I've struggled this entire post not to mention another digital card game I am having a blast with even though it suffers from serious drawbacks in a digital best-of-1 game format.  I hate to compare the two but the game I am referring to delivers a very complex and synchronous gameplay experience in a clean digital package while Artifact totally avoids players interrupting each other's turns.  Throw in what feels like an eternity for a timer for your opponent to make a decision and I'd just as easily fall asleep as I would finish a game of Artifact at this point.

I am very worried that Valve will try the free 2 play route which won't address any of the less fun parts of the game which will do nothing more than speed the death of the game.   Valve; I never expected Artifact to be boring and no fun to play.  Please fix.

Posted by heartlessgamer at 6:09 PM No comments: