I bought a house... in New World

Note: I've procrastinated getting this out so some of the information may be out of date to any recent activity from New World development.   These thoughts are my thoughts from the preview period in September 2020.

My recent disappointment with Crowfall and some burn out in Magic the Gathering Arena lead me on a search for an MMO fix.  Fortunately the Crowfall beta testers were more than happy to lament low player population numbers because of the New World preview event that had just started.  I knew of New World but I really didn't.  I had heard the buzz around their announcement to delay the game from it's original launch to refocus the game, but other than that I knew nothing else.  So I walked into the preview event with little expectation and I left the event with my pre-order placed and some excitement for a new MMO.

The immediate feeling I had wash over from me with New World was that its a beautiful game.  I have the benefit of a recent (and long overdue) gaming PC upgrade and the graphics were absolutely astounding.  At one point I was stalking (literally) through the woods in hunt of elk.  I aimed down the barrel of my musket into the underbrush backlit by a golden sunrise.  The smoke puffed up as the shot went off wounding the elk.  It reeled back on it's hind legs and trumpeted into the morning.  Out of nowhere a second elk head pops up.  A thunder of hooves and I was knocked to the ground.  I popped up and raced to get my musket trained back on the wounded elk but in the thick under brush and terrain of the wooded area I lost the beast.  I was hooked at that very moment. 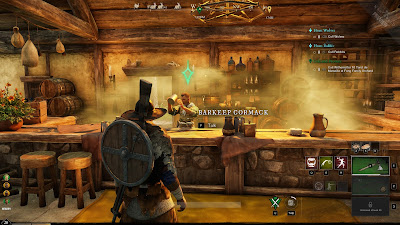 While the game is gorgeous there is a sense of copy and paste throughout the world.  The first time you roll into that abandoned farmstead is amazing.  The fiftieth trip to a copy and paste version of it somewhere else on the map; not so amazing.  The different zones do have their own feel to them as far as terrain and fauna but buildings felt exactly the same regardless of area in the world.

The core game-play loops within the game follow closer to survival games than they do traditional MMOs which is an artifact of the game New World was proposed to be originally before it was decided to revamp the game.

For PvE the core loop is get quest, run to quest area, complete quest.  There is not much variety in the quests; either they are kill X rats or open X crates.  This works, but will get old once the game exists for longer than a week so the game needs to make progress before launch on variety of content.  There is also gate events where players can group up to fight bad guys at the gate events in the map.  These were a mixed bag; thematically they were on point and visually stunning (the entire surrounding area goes into a crimson red fog, lighting shifts, and then there is the blazing portal at the center).  Outside of the stunning visuals though they were easily completed and during preview it was quickly discovered that a zerg of lower level players can easily take down even the hardest of these in the game.

For PvP there is a few options, but I really only participated in the faction flagged open world content; basically set your flag and do quests which earns you more rewards due to the increased risk.  As the game is level-based the experience was a mixed bag.  Fights at equal levels were fun (excepting some specific weapons that are broken *cough* hatchet *cough*), but some times the fights were lopsided due to level disparity.  I will talk more about the level system of the game later in the post.  There is other PvP modes such as castle sieges which look amazing (at least visually) in videos but mixed feedback on how competitive and enjoyable they are.  Personally I am more interested in the open world PvP and faction system.

For the economy players there is crafting and gathering and regional markets (i.e. there is not a global market).  Crafting feels good and the visuals of the crafting stations really dials the feeling in that you are in working in a workshop/kitchen/forge/etc.  The towns were also packed which really made the market and crafting area feel alive.  That may seem immaterial to the success of the crafting system of the game, but it certainly doesn't hurt.

Gathering in the game is straight forward.  Find stuff, click on it, and collect.  Repeat.  The adventurer in me felt rewarded by finding rarer gathering nodes in various nooks and crannies, but as the game kept sending me back to those areas and the same nooks and same crannies had the same nodes each time it reduced the sense of accomplishment finding them.  Experienced crafters will have these areas mentally mapped and hit them on repeat without trouble.  There was also some common gathering items needed for quests that were just not easily found or accessible so there was a sense that if you found them you were in to make some serious cash.  Unfortunately, again, they are static spawns so as preview continued on they were highlighted in guides for users to easily go and find.  I think a huge improvement to the game would be the randomize much of the gathering node spawns for the higher tier supplies to encourage exploration and variety.  With that said dedicated gatherers have a complete game loop and will be rewarded for their work.  I would like to see some form of mount or cart system in the game so you can take larger loads back to town; mix that with some PvP risk and there is some fun dynamics to e had.

The market aspect of the game is a straight forward auction house in each major city.  There is no global market so there is opportunity for regional price differences to crop up and for the wall street better there is a chance to find those inefficiencies in the market to cut a profit.  I didn't quite get the fast travel system in the game; it uses a currency that I wasn't clear on how you obtain.  You can teleport between cities using that currency but my experience is it ran out super quick (I think I was able to afford a single fast travel the entirety of the preview event).  If fast travel does stay restrictive it will aid in the market player ability to drive markets; if fast travel becomes too easy with large quantities of goods then the opportunities will close too quickly or only be open to the major players making big moves in the market.

During the preview event it was hard to get a read on crafted vs dropped loot items in the market.  The market was flooded with the dropped loot while crafted items seemed limited.  This may just be due to preview being limited in time so investment in crafting was not happening as it would in the live game.  I think it will be key for dropped loot to be limited in this game and for player crafting to be the main source of quality gear in the game otherwise the gathering loop will become less beneficial and that problem can cascade through the game.  There was no item loss that I could find in the game so once items are in the game, aside from them getting recycled, they are in the game forever.  That makes it really hard outside of consumable items for crafters to feel like they can make a mark.

Even with the downsides of the core loops noted; I found every aspect of the game engaging.  I liked the combat.  I liked the PvP.  I thoroughly enjoyed hunting the various critters of the land and carving them up into crafting materials (meat, feathers, etc).  I chopped down trees just to watch them fall (again the visuals in this game are awesome).  I played the market a little bit; flipping numerous items for quick profits.  I crafted a lot of food and other consumables; arrows was a steady stream of income to feed my addiction to needing ammo for my musket.

The bottom line is there is a solid core in the game and that has me excited on where this game can go.  There is still a lot to be done as far as content goes to drive more rewards from those core loops, but all signs are pointing in the right direction. 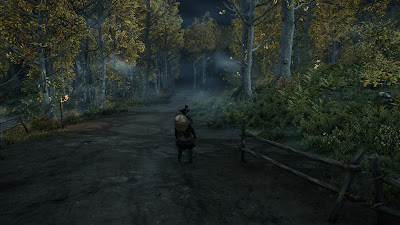 One thing I noted a couple times was that the game was level based.  This feels off for the game as it currently stands.  It may make more sense as content is added to the PvE side, but for PvP its a classic breaking point of higher level = better.  I think the game would be better suited if instead of leveling it had a tier system similar to it's crafting system that operates in tiers.  Each tier above is stronger than the one below but it's simplified into a few tiers vs a bunch of levels (I think level 60 was max during preview?).  While it wouldn't eliminate imbalance in PvP it would allow the developers to more closely balance between players since there is a smaller division between players.  It could also solve the problem with lower level players zerging down end game PvE content as that end game content could lock out lower tier players in the form of damage reduction (i.e. if you are tier 3 you can't do much damage at all to tier 5 enemies in PvE).  And yep my suggestions for tiers can be implemented with levels but then you just boil down to a few key levels where restrictions change and at that point why not just simplify.

To wrap this long post up (seriously it took me a month to meander these words through my keyboard) I ended up needing a goal in preview and I set that on buying a house.  Every house in the major towns can be bought.  Any number of players can buy an instance of the same house so you are not getting your own dedicated slice of land, but the instance of the house you buy is yours and you can place furniture, store items, and I assume do other things (I literally only made it to purchase not to actually using it before preview wrapped).  There is also a chance however you decorate your house will become the default visual everyone sees from the street.  This is managed through a simple voting interface.  You can visit other instances of the same house and vote up the one you want to see publicly; the house with the most votes is displayed.  This is a neat loop into itself and I definitely forsee some house fashion wars going on for players that dig that sort of thing (and again the game is visually stunning so players can really show off here). I'll leave the post on that thought a picture of my fine home purchase. 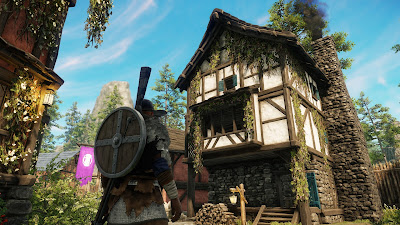 Posted by heartlessgamer at 9:03 PM No comments: