The Terraria developers have posted a look at what their plans are going forward now that they've made multiple-millions of dollars with their game.


Progression has been pretty slow over the last week. I've actually been in the middle of moving. I put an offer on a house before the first trailer went public, and got the keys to it the day before Terraria was released. (Great timing, huh?)

I just finally got my workspace set up at the new place, so I should be able to get back to the grind early next week. But enough about that, let's talk about the future of Terraria.

My immediate focus for the game will be patching up the remaining bugs, implementing Steam features, and of course working on multiplayer to make it more secure and accessible. Multiplayer is a bit of a mess right now, and a dedicated server with no graphics card requirements is very much needed. Content progression will be slow for the next few weeks until we get all of the necessities taken care of. Though, we will be adding a few new things here and there to keep you interested.

In the long term, we will not just be adding content, but new mechanics as well. Some of the ideas the we have been playing around with are:

Pure PvP servers with team based objectives. Worlds will be generated before every match. Imagine a CTF server where towers are automatically created on either side of the map. Players can fight it out on the surface, or try to tunnel into the other tower.

Enemy factions that will move into your world, and build their own city. You can slaughter them while they are weak, or let them build up their strength to get better rewards.

Farming, and stamina system that gives a bonus to player stats.

Mechanics for making traps and devices.

Terraria has endless possibilities, and there is still a lot more that we want to do with it. In the meantime, please be patient while we get the last few kinks worked out.

Posted by heartlessgamer at 3:18 PM No comments:

Email ThisBlogThis!Share to TwitterShare to FacebookShare to Pinterest
Tags: Terraria

Just wanted to share some videos now that Frozen Synapse has been officially launched. This is a really well done game with some great "extra features" such as in-game recording and uploading to Youtube.

In this first game I dominate from the start (I'm GREEN in the video). The key to victory here was using cover while my opponent kept sending his guys into the clear. Also note how I ensure each of my guys covers the other once I have a numerical advantage.

More videos to come, but they are failing upload to Youtube for some reason.
Posted by heartlessgamer at 10:35 PM No comments:

Email ThisBlogThis!Share to TwitterShare to FacebookShare to Pinterest
Tags: Frozen Synapse, My Videos

The Business of Terraria vs Minecraft

Many pundits would like you to believe that Terraria is a copy-cat of Minecraft.  Others want you to experience Terraria for what it is: a game with similar goals that is partially influenced by Minecraft (and Metroid and Final Fantasy).  Which ever side of the fence you fall on, there are some business decisions that distinguish Terraria from Minecraft.

First and foremost, Terraria launched through Steam.  Minecraft, while technically not yet launched, opted to roll out of the alpha/beta gates with its own platform and suffered weeks of log in server problems, PayPal issues, and a ton of website downtime.  Terraria launched smoothly and pain free through Steam.  So while Minecraft developers scrambled to deal with platform issues after their beta launch, Terraria has enjoyed a honeymoon where their developers can focus on the game.

Secondly, I get the distinct feeling that the Terraria developers just want to make a great game.  On the other hand, the Minecraft developers certainly have made and continue to improve a great game, but I've always gotten the feeling that they want to be a "big game developer".  Notch, Minecraft's chief developer, alluded to this when asked about possibly working at Steam's parent company Valve: "I don't want to work for Valve. I want to be Valve."

All evidence shows that Terraria is a smash hit.  Peak user numbers on Steam have been stellar and for a few days even unseated Counter Strike as the most played game on Steam (that's a pretty big deal).

As far as I can tell, it's smooth sailing for the Terraria developers and with the Steam platform (and possibly Steamworks) on their side, I expect many great things from Terraria.

PS. If any Terraria developers read this, please, pretty please implement the Steam cloud for world saves!  Thanks.
Posted by heartlessgamer at 2:31 PM No comments:

Terraria combines the best of side-scrolling platformers (think Metroid) with the variety of RPGs (think Final Fantasy 3) and throws it all into a completely consumable/destructible/rebuildable world (think Minecraft).

After an hour of play I am very impressed with the game. I was worried initially that a keyboard and mouse would not fit well for a sidescroller, but I was pleasantly surprised to find the controls to be responsive and easy to learn. Mastering some of the more complex movement will take some time which gives the player a rewarding feeling when they complete a relatively complex jump.

For those players that suck at timing jumps and landing on near invisible parcels of dirt, there is the option to dig up and pile a bunch of dirt (or clay, wood, stone, sand, or any number of harvested blocks) to get to the desired point. This is taken even further when players start building houses and other dwellings out of the available materials and start filling them with crafted items.

Crafting within Terraria is insane. There are TONS of items to make that unlock other items that unlock other items that; OK you get my point. There is everything from flower pots to grappling hooks. Different tools can be crafted that perform different tasks. Weapons and armor can be crafted and there are super-secret hidden versions of each that really drive the player forward to keep exploring and trying to combine/find new ingredients.

The crafting is recipe based, but the recipes are not something that are known. If at the applicable crafting station (work table, anvil, furnace, etc) with the correct items, the end product will show up in the crafting menu. For example, a wooden sword may require 3 pieces of wood (I forget off the top of my head). The player can go along finding out the combinations themselves, or any number of available websites can spoil the fun for them. In some of the rarer item cases, spoiling is about the only way to go.

Those rarer items will be needed, because come nightfall, just like in Minecraft, the monsters come out to play. However unlike Minecraft, Terraria is dead serious about its combat. The monsters that appear during the first night of the game are no pushovers: flying eyeballs, zombies, and the ever-annoying slimes (which are also present during the day). Kicking it up a notch, there are mega bosses like the Eater of Worlds who take up the better part of a screen and appear after certain events like smashing three shadow orbs occur.

Most amazingly, we've only scratched the surface of Terraria because there are other things like NPCs that will inhabit your buildings and sell you goods or provide services (think RPG NPCs like shop keepers and medics). Plus we need to keep in mind that the world is randomly generated and includes an entire underworld and possibly even sky castles. And again, the entire world is destructible down to the very last block.  A player can craft a few dozen bombs and blow their way to hell!

Oh and did I mention it has multi-player which allows several friends to play together in the same world and enjoy the same batshit craziness together? Oh, I didn't? Well there's that too. Terraria is awesome.
Posted by heartlessgamer at 2:13 PM No comments:

Email ThisBlogThis!Share to TwitterShare to FacebookShare to Pinterest
Tags: Terraria

Posted by heartlessgamer at 4:33 PM No comments:

Per a request elsewhere, I've drawn up what I use as my two-way cart switching station in Minecraft. I use this switching station at almost every stop on our SMP server's minecart system. This allows the rider to either stay at the current destination or continue on.

The following screenshots are of the basic design and principles for creating this. The RSNOR latch and track layouts can be easily adjusted to save space or add functionality. I also do not include an arrival track onto the switching point, but a track can be run to a couple blocks above and drop a cart (and rider) onto the powered track piece (or any other number of ways to put a cart into place).

And the screenshots with explanations (click for larger versions): 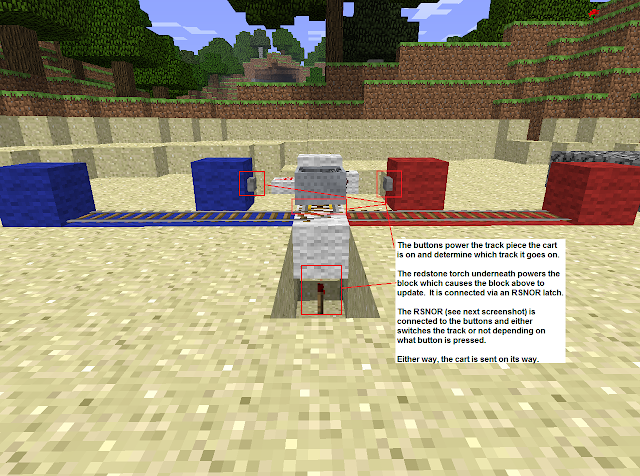 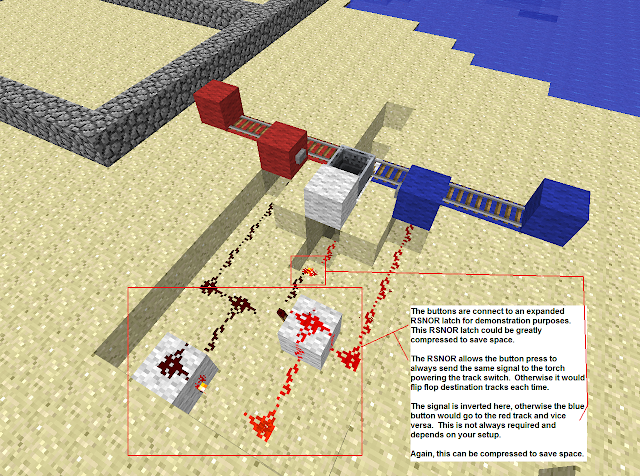 Also I don't want to claim to have invented this completely. I was inspired and this is sort of just a reworking of the following video:

Posted by heartlessgamer at 1:51 PM No comments:

Posted by heartlessgamer at 11:32 AM No comments:

. Hopefully the game can live up to at least five of them now.

Posted by heartlessgamer at 9:58 PM No comments: