HOARD: A Game about Dragons and their Gold

I've given the Hoard demo a spin and found it to be a very entertaining game. The basic premise is that the player controls a dragon who most pillage the landscape and bring the resulting spoils back to their hoard. This means destroying towns, capturing princesses, torching knights, and all manner of destruction. On top of this, the player competes with other dragons. It is a fun time waster with enough to keep the player entertained for quite a few hours. 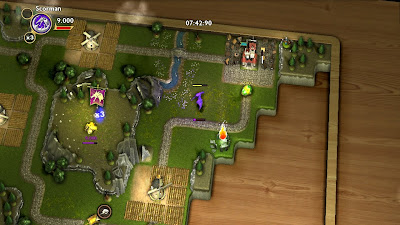 Along with the straight up destruction, dragons can make the various towns fear them and therefore pay tribute. Princesses can be snatched up and if held captive long enough, a ransom can be gained. Also the dragon's hoard is never safe with thieves lurking about.

The depth of the game is questioned in a lot of reviews. At first glance it seems shallow, but I think that is a benefit to the game. Its really more about just having fun than about thinking ten moves ahead. I think too many games forget this and before they know it, the game is a complicated mess that no one except the hardest of hardcore can get into. It wouldn't work for Hoard.

Next up: multi-player and Easter eggs (which I'm going to dive into later today as it was just enabled for the Demo).


For a limited time, you will find some eggs if you are lucky! Collecting enough eggs earns you the "Egg Hoarder" achievement. This is work a solid 2,000 Hoard Points, which will help level up your Hoard Profile in no time.

Get out there quick, though--the eggs won't be around forever.

Also, for those wanting to try HOARD, we've enabled limited multiplayer play in the demo. Try out "Lucky Town" (competitive) and "A Bridge Too Near" (co-op) for a taste of multi-dragon action against/with humans!

This update also includes many bug fixes and improvements. We are continuing to work on issues and won't be happy until everyone is having a seamless experience.

Posted by heartlessgamer at 3:10 PM No comments:

Found this sexy image while surfing around the net tonight. It shows off the character sheet from a Trooper in Star Wars: The Old Republic

. And no, this is not a beta leak. It's a picture taken at PAX East. 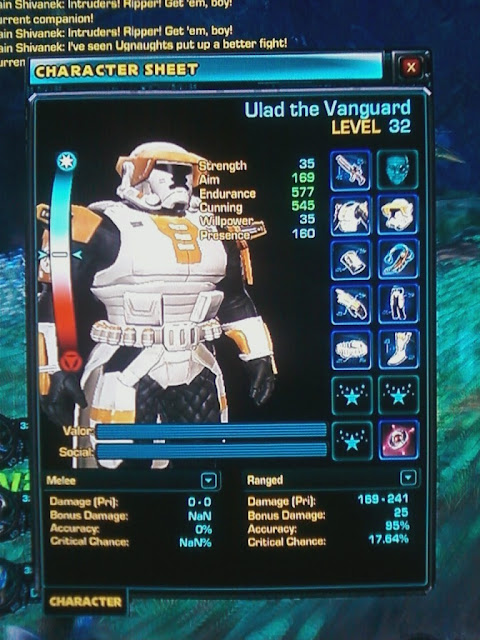 And I'm not quite sure what to make of all of it. I'm curious about a few things.

What is valor? What is social? I'm guessing both tie into story elements and how "adequate" your character is within a conversation.

There is a good/bad meter on the left-hand side. However, I certainly hope by "level 32" that the bar will have moved significantly one way or another and that the true neutral play style will be truly difficult (lol, true, truly!).

Lastly, I'm curious about the four "star" blocks on the lower right. Mystery!

Oh and the UI actually looks pretty, unlike the combat we've seen from the game.
Posted by heartlessgamer at 9:29 PM No comments:

Email ThisBlogThis!Share to TwitterShare to FacebookShare to Pinterest
Tags: SW:ToR

Why I don't play League of Legends anymore

In a funny turn of events, I spent $18.33 to buy the "League of Legends box" and then promptly stopped playing the game. The box is a decent deal compared to the individual micro-transaction prices for the items it includes and the main game is free to play.

I had all intentions of continuing to play LoL for a good long while. The game play is solid, the graphics excellent, and the community is not the nightmare it's been made out to be. I enjoyed playing LoL while I was active. LoL had all the action and player conflict that I was looking for in a game, wrapped in a pretty fantasy setting.

So why am I here writing up a post about why I no longer play League of Legends? Because I have a blog, that's why.

The main reason I don't play LoL anymore: the matches last way too damn long. The average match in LoL, for me, was approaching 45 minutes. Best case scenario is that one of the two teams dominates and the other forfeits at the 25 minute mark. Worst case scenario, it drags on for an hour. Fortunately going past the hour mark usually results in the dominos falling and one team becomes overwhelmed.

While I play plenty of games in one hour chunks, I don't think I've played any game that has as much "busy work" as LoL. Every second of a match past the first minute in LoL is important. Every action must be thought out and guided in execution. The players that take a back seat and auto hit creeps or lag behind getting to a team fight are the one's losing or getting farmed.

This is NOT a bad thing! LoL is popular because it DOES require constant attention and DOES require player skill. However, it directly adds to my non-enjoyment of the length of matches. Let’s break down a normal 35 minute match for a carry (aka a class that is "carried" to the end game before becoming important):

I have to maximize every creep wave for up to 25 minutes while on and off again harassing my opponent in my lane. However, I am not attacking the creeps unless I am going for a last hit. This means I have to constantly dance back and forth to prevent auto attack from screwing up last hits. At the same time I have to watch the health meters of each of the creeps to judge when to hit to get the kill.

Approaching the last 10 minutes of the game, team fights start to break out across the map and I have to be able to immediately drop what I'm doing and join in. Being a few seconds late to a team fight can be critical.

Approaching the end of the game I am now either in the opponent’s base pushing down the last towers/inhibitors or if we are losing, desperately trying to get out of the spawn area to maybe push a lane and make up some ground for the rare come-from-behind victory. However, this means I am back at step one optimizing the farming of creep waves.

If I find myself dead during any part of the match, one would think I could step away for a little breather. While I certainly could, its wasted time and I'm missing the golden opportunity to look at the opposing player's builds and also determining my gear path to counter my opponent.

This series of events only describes what I would be doing as a carry. There are different sequences of events for tanks, support, etc. Again, NONE OF THIS is a knock against LoL. This is what people love about the DotA-style game. My problem comes in at the length at which I need to keep up with the busy work and the fact that I can't look away for a brief intermission.

To add onto the problem of match length is the situations where teams are blatantly mis-matched and everyone is just waiting for the 25 minute forfeiture mark (or maybe its 20 minutes now). Nothing is more frustrating than waiting nearly 20 minute to just throw in the towel and gain little to nothing for the effort.

So LoL just doesn't fit my play style, but I still enjoyed the game while I played it. Being free to play, I will probably stop in every once and a while for a game or two. I think there are some definite improvements that could be made to help with match length, both in time and "busy work":

1. Decrease the length of the laning phase by allowing them to be pushed faster. Start by spawning creeps the second the match starts instead of half a minute later.

2. Encourage meaningful player combat instead of harassment. Harassment is annoying and can completely eliminate a player from the match early on leading to a "leaver" and lopsided match.

4. Automate the damn store. Let players set templates that they can 1-click for the next item. It’s terribly annoying having to manually click through the store.

With all of this said, I wanted to make it clear that these changes are recommended for MY enjoyment of the game. They are NOT an indictment against LoL. LoL may just not be the game for me and I need to be looking at something like Bloodline Champions where the matches are less than 5 minutes and focus only on team vs. team combat. I just wanted to get this posted for my sanity, as justification as to why I've abandoned LoL.
Posted by heartlessgamer at 10:29 AM No comments:

Email ThisBlogThis!Share to TwitterShare to FacebookShare to Pinterest
Tags: League of Legends

A Preview of Minecraft Patch 1.5 Weather and Achievements/Stats

Posted by heartlessgamer at 1:44 PM No comments:

Step 1: Head on over to scrolls.com and scroll to the bottom.

Step 2: At the bottom enter your email address

Step 3: When accepting the agreement, check the box for "Opt in to become Alpha Tester"

Posted by heartlessgamer at 1:59 PM No comments: