Posted by heartlessgamer at 8:41 PM No comments:

Rift is World of Warcraft

Rift may be a completely different game than World of Warcraft, but I will never know.  I've played two hours of Rift and had I not seen the title screen, I would have thought I was playing World of Warcraft.  This is the same thought I had while playing Aion.  The same thought that made me shriek in horror when I finally got to play "the game that shall not be named".  It annoys me that so many games have copied World of Warcraft and not just copied ideas, but cloned wholesale everything about World of Warcraft.  It is so bad that the games are all using the same text color to identify different levels of loot.  The font used looks almost exactly the same.  The icon shapes.  On and on and on this goes.

There has been a long running discussion that World of Warcraft just copied Everquest which just copied DIKU MUD and therefore the current flood of WoW clones is expected.  I disagree with this line of thinking.  Everquest's biggest achievement is that it brought the DIKU MUD to 3D graphics.  Other than that, I would argue Everquest was a pretty terrible game.  World of Warcraft's biggest achievement was that it refined the DIKU model into something that made sense with a massively online game that is beyond a doubt one of the best games ever released.  Secondly, WoW brought MMO to the mainstream.

Does this make these games bad?  Not really, but after an hour of playing Aion I was done; having decided if I wanted this experience I would just go back to play World of Warcraft.  Rift?  Same story.

Yet, the worst part is each and every game tries to sell itself as though its the "next big thing".  That its ONE THING IT WILL DO DIFFERENTLY is the NEXT PILLAR OF WHAT IS GOOD IN GAMES.  It's annoying.  These developer's need to just shut up and tell gamers that they really liked World of Warcraft and wanted to make a game that emulates it.  I would be far less pissed off about the state of the MMO industry if the big players would just come out and admit they are riding WoW's coattails

Rift is World of Warcraft.  I don't care if the game gets better in the later levels or has some whiz-bang new idea that you get to enjoy at some point.  Give me something different that as soon as I start playing the LAST thing I think of is the other game I played before it.  When I played DOTA 2, I didn't think "oh man, this is League of Legends".  DOTA 2 is it's own game.  It defines itself as something unique.  AND DOTA 2 IS A LITERAL CLONE OF ANOTHER GAME!

Fuck it, Valve make me a god damned MMO already.
Posted by heartlessgamer at 3:54 PM No comments: 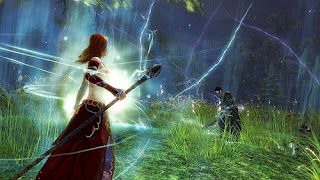 A week doesn't seem to go by without someone buzzing me and asking why I'm so silent on Guild Wars 2.  Some have gone as far as to scream in my general direction that "IT IS EVERYTHING WARHAMMER ONLINE WAS SUPPOSED TO BE!!!".  To be honest, and to admit this for the first time publicly, I'm still a little butt hurt over Warhammer Online and it's epic shortcomings.  I've sworn off caring about big-name MMOs until I get my hands on them and the NDAs have dropped.  With that said, I do agree that GW2 is shaping up to be what Warhammer Online should have been, but with so much more going for it.

While I don't believe I ever blindly bought into the hype of Warhammer Online, I am certainly a victim of foolishly believing the game was more finished than it turned out to be.  I still maintain to this day that Warhammer Online put all the pieces together for a great MMO, but forgot to add the glue and nails that would keep it all together.  Band aids could only hold that sinking ship together for so long (surprisingly it's still not Free 2 Play).

Warhammer's failures put GW2's features into perspective.  Simple things such as allowing instant access to end-game PvP zones, PvE content in the PvP zones, and having PvP objectives outside of just killing other players would not mean as much (to me) had it not been for Warhammer Online's complete opposites.  Warhammer Online allows me to smile a little bit inside every time I watch or read a new bit of information about GW2.

Another small area of pleasure is looking at GW2's World vs World (WvW), most directly comparable to Realm vs Realm from Warhammer Online. Unlike Warhammer Online; GW2 took an interesting path to get to its WvW system.  Instead of distinct races/areas dividing the "teams", GW2 simply pits server against server. Each server has the exact same world, characters, and classes that the other servers have.  This instantly strikes a balance and the conflict comes down to numbers and grand strategy to decide the victors.  Throw in a bit of match making to re-balance equally skilled servers together and the forumla looks solid.

Matter of fact, GW2 looks solid as a whole (even in it's beta stage).  And this is why I am silent.  This is why I've stopped clawing to watch every new video or story that is released. I have yet to even pre-order the game. I want as much of GW2 to be fresh to me as possible.  Hopefully that will limit the butt hurt this time around on another promising MMO.

Posted by heartlessgamer at 2:05 PM No comments: