The first thing Mark needed to address in his outline was the performance issue. None of the features listed will mean a damn thing if the zones don't stop crashing and players can actually COMPLETE the end game objectives. Every single resource Mythic has needs to be focused on resolving this issue. I posted this thought on the VN WAR message boards, but the thread was locked. However, the last reply before the lock intrigued me.

So basically you want, the combat and career team, the web development team, the quest team, the gui team, and all the other various teams that work on WAR to sit around and look over the client/server/dba engineer teams shoulder while they work on performance?

Yes, every single development team needs to review their respective systems and determine what can be done to improve the performance of WAR. Without resolving this single issue, WAR will not survive long enough to see the other changes into fruition.

The second thing Mark needed to address was the fact that victory is impossible to achieve when enemy warcamps are placed within spitting distance of each other. Victory is important in a game designed around sieging an enemy city. Victory can not be had when the enemies are back on the battlefield seconds after being defeated. Stating that they are actively going to make it easier to get to the fight shows a fundamental flaw and a leaning towards an instant gratification strategy.

It's a double whammy. Mythic wants to encourage more people to get into open RvR and make it easier for them to get there, but they don't want to admit that their game's technical performance is not up to par. Yes, Mythic is probably working hard on resolving the performance glitches, but they need to shut up and admit the problem exists and dedicate every single resource to slaying the beast. Beating around the bush just pisses players off and we're leaving in droves because of it.

Mythic, WAR is UNPLAYABLE in it's current state. New features can not fix bad performance.

With that said, I'm glad they at least are planning new features and should they actually fix the performance problem, WAR will be a much better game. I just don't see the performance issue getting fixed any time soon.
Posted by heartlessgamer at 7:20 PM 16 comments:

I hear these guys are really cool.
Posted by heartlessgamer at 10:02 PM 1 comment:

Did something big happen today?

I can't help but feel I've missed something big happening today. Oh well, couldn't of been that important.
Posted by heartlessgamer at 9:50 PM 2 comments:

Email ThisBlogThis!Share to TwitterShare to FacebookShare to Pinterest
Tags: World of Warcraft

Congrats to Obama. He won a fair fight.

Obama won because he wasn't the standard politician. All I ask is that governs fairly and honestly towards his campaign promises, or he will become just another politician. That is the last thing America needs.
Posted by heartlessgamer at 7:27 AM 3 comments:

I have to admit the only reason I picked up Elantris was due to the announcement that Brandon Sanderson would be writing the twelfth, and final, book in the Wheel of Time series. Along with favorable reviews, and the fact that the story begins and ends in a single book, really sold it to me as a book worth reading to get a measure of Sanderson’s abilities.

The main point to understand about Elantris is that it is an epic fantasy tale wrapped up in under a thousand pages. It covers the gambit as far as epic fantasy goes. There is the hero, the villain, the princess, a story, and most of all, the fantastical world.

Elantris, located in the nation of Arelon, is more than the title of the book, it is the name of a magical city that ten years prior stopped being magical. Outside of Elantris is the smaller, non-magical city of Kae, newly revitalized in the wake of the downfall of Elantris and now the center of Arelon’s monarchy.

Elantris serves as a prison, housing those unfortunate enough to be afflicted by the magic that once made the city and the Elantrians great. The book begins as Raoden, the prince of Arelon, becomes afflicted with this magic and is cast into the crumbling city of Elantris. The story excels from that point forwad. Every chapter spent in Elantris is well worth the reader’s time.

Outside of Elantris, two other points of view are followed: Raoden’s widowed-before-the-wedding wife, Sarene, and Hrathen, priest sent to convert the non-believers of Arelon. While Raoden struggles within Elantris, Sarene and Hrathen battle politically in the city of Kae.

I thoroughly enjoyed the chapters involving Raoden and the overall story line of the book. However, the chapters involving Sarene and Hrathen take a while to become enjoyable. Sarene is just too much of a stereotypical feminist, while Hrathen is the obvious conflicted bad guy. I did enjoy Hrathen overall, but the most interesting aspect of Hrathen was his back-story which I would not have minded more of.

Fortunately, towards the end of the book, the three characters become entwined together in the chapters and the pace picks up significantly. The plot spins down quickly and an expected, but well-executed, ending unfolds.

Overall, the book serves its purpose as a one-book epic fantasy tale. More back story on Hrathen would have been nice and the pacing could have been smoother. It was refreshing to read a book without having to worry about the next book in the series. Elantris tells a great story that begins and ends within a thousand pages. Quite a feat in an otherwise bloated fantasy genre, especially for an author tagged with the responsibility to conclude one of the most bloated epic fantasy series out there.
Posted by heartlessgamer at 7:40 AM 1 comment:

Email ThisBlogThis!Share to TwitterShare to FacebookShare to Pinterest
Tags: Books

Happy Witching Night! Hope everyone had fun. Unfortunately, I didn't get to participate in any of the RvR Public Quests, but I did win a roll on a mask drop! 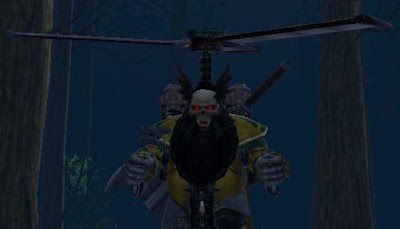 Posted by heartlessgamer at 9:49 PM No comments: