It is an undeniable fact that it takes money to maintain online games for players.  The revenue from initial sales cannot justify a game’s online existence past a set amount of time.  Subscriptions or DLC or micro-transactions are a reality (Guild Wars not withstanding).  Currently the Free 2 Play with micro transactions model is winning out.  Players get hooked on the freebie and then come back paying for more.  Some people view this as bad, but personally I view it as good and in my world it’s a way for me to reward the developer for giving me the game to try first before I invest.
This upkeep is one of the reasons I believe we have not seen many popular board or card games come to the multi-player online space, even when they are directly tied to an online game.  It baffles me that the World of Warcraft card game, is in fact, a physical card game.   Where is the UI mod that lets me play WoW the card game while playing WoW the MMOG on my PC?
I can live without fluff card games such as the WoW CCG on the PC, but I have a significant itch for some good online multi-player board gaming on (and I’m not just talking cheap flash rip offs).  Fortunately, in stepped Days of Wonder (DoW) with Memoir 44 Online.

Not only did they pick the right game to try out to scratch my itch, but they chose the right platform (Steam) and a solid business model (pseudo-subscription).
In order to play games online, players must spend Gold Ingots (GI).  For starters a player is given 50 GI, which results in them being able to play about 16 games completely free of charge.  From there they can purchase buckets of GI to play more games.  The amounts are various generous and I can forsee months worth of play for very little investment.
My only concern with the model is that it probably won’t work for games with smaller followings as after the initial freebie rush, the players start getting gated out.  I’d prefer to see a monthly recurring infusion of free GI to players so the free ride lasts.  If the game is good enough it will convert those free riders into paying players.  Free GI would actually be a great way to market the game.  Other systems such as refer-a-friend would work as well to reward players for joining up.
Memoir 44 Online is doing its best to show the potential of this system.  It’s a great, time-tested board game to begin with, so it was a question of implementation and DoW nailed it.  Anyone having played the board game can immediately sit down and be ready to go with the PC version.  For new players there is a well made tutorial and the game itself lends to ease of learning via right clicking to see the rule cards governing each piece of the game.
Online match making is a little hard to understand as the same screen used for launching solo play is used to initiate multi-player games. After a quick chat in the main chat room, I was able to figure out how to start a match (but ended up being invited into a game by another player).  I didn’t fair well on my first couple of matches just due to the fact I hadn’t played Memoir 44 in ages and have far more experience with its fantasy-based sibling Battle Lore.


The game runs absolutely great on my laptop (Alienware MX11 R2) and hooked up to the big screen it’s a glorious site to behold.  The added flair to actions and combat is a nice touch.  And the biggest benefit to playing this game digitally is the zero set up and zero clean up of all the tiny plastic pieces! 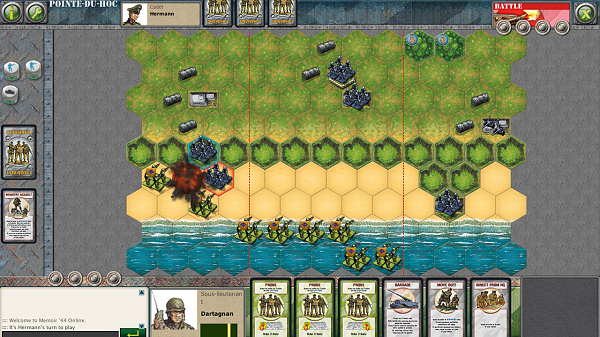 Posted by heartlessgamer at 3:02 PM

Email ThisBlogThis!Share to TwitterShare to FacebookShare to Pinterest
Tags: Board Games, Days of Wonder, Memoir 44, Steam