You won't believe whats coming next to New World! PvP players will be pissed!

The New World December Dev update video is out and with it comes Roadmap 2.0.  You won't believe whats in it! Read on (or watch the embedded video) to find out and I'll also share some of my thoughts.

First, apologies for the click-bait lead in but it was purposeful.  The first thing to note about the Roadmap 2.0 what was shared in the update is it is pretty much what was expected.  Nothing surprising or exciting.  It was a confirmation of "we are going to do what we said we were going to do".  Let's take a look at the Roadmap 2.0 as thats where I want to focus my thoughts. 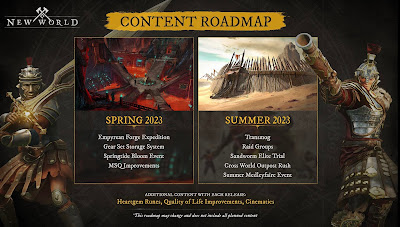 Unlike the first roadmap that covered an entire year this roadmap is only half a year.  I am good with that as it will give us something to look forward to later in the year.  Also doesn't commit the team to things that may or may not be relevant in a few months time.

The first item on the roadmap that I want to shout "HELL YES!" about is the Spring 2023 "Gear Set Storage System".  This is the number one item on my list of features for this game.  I would do more content more often if it was easier to change out my gear.  While I have previously stated I was fine with "using a spreadsheet" that has worn on me; it still takes 10+ minutes to make the changes to other gear sets to swap to different content.  Thus I just stick in my PvP gear for the build-of-the-moment and then shrug my shoulders at the thought of not doing PvP content.  Yet I have half a dozen PvE sets ready to go for any sort of PvE content.

Spring 2023 also includes a new expedition.  I know this pissed of some PvP players to see another PvE expedition and no PvP-specific content, but I like it.  I really enjoy New World's expeditions.  The more the better.   I would have liked to see "and we will have cross server expeditions" as part of this road map but understand that is going to take time (note: they have said they are working towards it).  I play on a high population legacy server so getting groups is not really a problem.

MSQ Improvements is also on the Spring 2023 portion of the road map.  Not excited about this at all.  I get why they are doing it since they revamped the level 1-25 portion, but as I wasn't too impressed by the new experience so I really don't think it merits more work.  Yet, for new players coming to the game it makes complete sense so I'll just say "OK" to it.

In the Summer 2023 category of "HELL YES!" is the transmog system.  Having played Guild Wars 2 - aka Fashion Wars 2 - I look forward to besting enemies on the field of battle dressed as a chef.  Also there sounds like there will be a collection aspect to this so you can "check the box" on all the transmog skins you have collected.  I like making sure boxes are checked.

Also in Summer 2023 are raid groups and the first "raid" (aka elite trial as they are calling it).  We will finally get to go beyond 5-player groups and also get to take on the giant sandworm that tremors around Brimstone Sands.  The worm will supposedly be the "hardest PvE content" they've delivered requiring maxed out gear and solid coordination.  That will probably limit how much I get into it because that's not really my thing in MMORPGs; I am the guy that likes to squash regular expeditions in my full 625 GS sets.  But I was also not a huge "dungeon" player before New World and yet I've found myself from time to time doing a lot of "dungeons" in New World  (at least more than I did in games like World of Warcraft).

Then last but not least on the Summer 2023 hype train is Cross World Outpost Rush.  HELL YES!  HELL FREAKING YES!  I love OPR (Outpost Rush) more than any other game mode in New World.  Even on populated servers it doesn't always mean there are 40 interested players to get an OPR started.  Cross server will solve this and I suspect lay the ground work for future cross server content like expeditions.  Any PvP player complaining about this road map is not recognizing how key cross server OPR is to getting better PvP game play out of New World.  PvP players should be hanging their hats on this roadmap item!

Speaking of PvP players one item NOT on this roadmap is ranked PvP arenas.  One would have thought that ranked PvP arenas would be right up there as "next" on the list of things to do but here we are and its not listed.  Does it mean it won't happen? No, they could fit it in under the "additional content with each release" disclaimer.  Personally I think it speaks to something about arenas: they just aren't where it is at for this game.

The game just doesn't shine in 3v3 arenas in my experience.  I play a ton of solo queue arenas but that is mostly because I play in small increments and can't wait out an OPR queue.  Once cross server OPR exists I probably won't do 3v3 arenas except to get my gypsum.  3v3 arenas are more often frustrating than rewarding; rare is the competitive match and "competitive" matches I've watched from the good 3v3 teams are long drawn out messes of who gets lucky enough first.  I will repeat it: competitive 3v3 arenas are NOT where its at for New World.

To recap the roadmap: we are getting what Amazon Game Studios said we would be getting.  Mainly that was more expeditions, gear set management, transmog, and raids (elite trials).  This likely pisses off PvP players, but what doesn't piss those players off?  For the sometimes PvP and sometimes PvE players that make up the bulk of this game the road map is spot on.  Way to go AGS!

Posted by heartlessgamer at 10:46 AM