For a primer, read my Guild Wars 2 Will Fail post from yesterday. 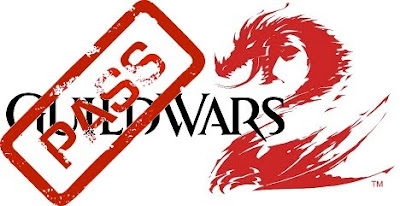 (GW2) starts with some strikes against it, but it also starts with some potential.  First and foremost is GW2's business model.  The game will be free to play after purchasing a retail copy similar to the first Guild Wars.  This alone separates the game from the throng of games that will be dependent upon monthly subscriptions when GW2 comes to the market.

Secondly, GW2 is changing up some of the foundations of the Diku model.  The biggest change here is the removal of dedicated healing in the game.  Each individual player will be given self-healing skills that will account for the majority of healing in the game, both in solo and group play.

Next, GW2 is easing the limits on how a class defines a player's characters. The various classes will have a core mechanic, but their available skills will be based on equipment, race, and a set of personal healing abilities.  For example, a warrior wielding a 2-handed axe will be played much differently than one wielding a 1-handed sword and a shield.

The third change that comes to mind is the fact that death will not be immediate in GW2.  If a fight is winding down and a player is struck down, they become disabled.  During this disabled period if the player manages to kill a creature, they receive a second wind and can go on fighting.  Anyone that has played Borderlands

will be familiar with this mechanic.  This lessens the sting of death and builds the perception that the player is a hero, not just some schmuck that was wiped out by a giant rat that added into a fight (a rat the player could cleave in two with a single blow!).

Guild Wars 2 is also aiming to shake up the game world with live events.  Think of this as Public Quests version 2.0.  Public Quests were easily the best feature of Warhammer Online

and GW2 is taking them to another level by building the entire world around them.  If a player is in a village and see's all the villagers dieing due to poison that was dumped into their water supply, they can investigate and find the water pipeline into the city is being attacked and poisoned just outside of town. Beat the bandits causing the problem and save the village.  This is just an example of a couple stages of a "public quest" that will be featured in GW2.  This system has great potential and its only weakness is that the events will recycle themselves, so at some point it may feel like the players accomplished "nothing".

I've outlined some of the changes GW2 is attempting, but the game is still very much a traditional affair.  The core of the game will be familiar to anyone that has enjoyed MMOGs over the past several years.  Arena Net is being very careful to make this clear.  They talk a lot about changes, but also concentrate on making sure everyone knows they are not rewriting the book.  They don't want to rewrite the book and are being honest about that fact.  I wish other developers, creating very similar games, could follow Arena Net's lead in this regard.  Adding one new feature doesn't make a AAA MMOG "ground breaking".

Looking at the reasons I've presented for failure and success, its interesting to note that they are in two very distinct categories.  The reasons for failure are all conjecture: its a 2, its making changes, and its got heavy competition in the fantasy setting.   The reasons for success are almost all related to the way the game will play: healing, death, and a living world.  I'll let you be the judge, but the reasons for success sound a lot more worthwhile than those of failure.
Posted by heartlessgamer at 9:14 AM