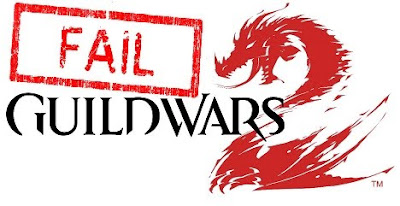 There are plenty of examples that sequels do not work in the MMO market.  Ultima Online 2

was the original victim of what I like to call the terrible 2s.  Asheron's Call 2

shutdown on December 30, 2005 while the original Asheron's Call

, out of all the 2s, should have been a right to print money.  Everquest was the undisupted champion of the early graphical MMOGs and Everquest 2 was the expected front runner of the "next generation".  How terribly wrong that general consensus was.  World of Warcraft taught everyone that the Everquest "idea" was wrong and that Everquest never was "right".

This all sets a stage where upon the new 2 in the neighberhood, Guild Wars 2

If being a 2 wasn't bad enough for GW2, it is also "a high fantasy world with multiple races" (like my new tagline?).  GW2 will have to compete with the Everquest 2 slaying World of Warcraft and it's record-breaking expansions.  Star Wars: The Old Republic will also be major competition for GW2 as they are the top two upcoming AAA titles in the MMO market (Star Wars being more fantasy than SciFi by miles).  Not to mention the plethora of free 2 play fantasy offerings that are quickly eating into the AAA marketplace. Fantasy is saturated!

There are other concerns as well.  GW2 is doing away with the holy trinity by removing the dedicated healer from group play, softening the blow of death by allowing second chances after a characters health is depleted, and moving towards a more action inspired combat system.  All of these may be equally positive things, but they are all "different" enough to cause concern in a genre that is averse to change.

Don't get me wrong, I'm not here to doom and gloom all of the upcoming MMOGs.  Specific to Guild Wars 2, come back tomorrow for the reasons why Guild Wars 2 will succeed.  Honestly, Guild Wars 2 is looking to be the only AAA competition coming any time soon.