at some point in the future? That is the question being pondered in a piece over at PC Gamer:


The rise of the free-to-play western MMO hasn’t gone unnoticed at Blizzard, developers of World of Warcraft, the dominant western subscription MMO. Speaking to PC Gamer at their studios in Irvine, California, World of Warcraft’s lead designer, Tom Chilton, explained that “at some point, it may not make sense for us to have a subscription fee.” 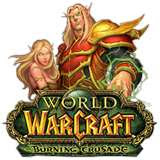 We all know that WoW was a game changer as far as MMOGs were concerned and with every expansion or change it continues to be one. If WoW was to make the switch to free 2 play, it would become something even greater than a game changer. It's legendary status would be cemented and the genre changed forever.

With that said, I don't see it happening anytime soon and when and if it does, it will be long after WoW has peaked and the money train has moved on to another Activision Blizzard title.
Posted by heartlessgamer at 1:12 PM

Email ThisBlogThis!Share to TwitterShare to FacebookShare to Pinterest
Tags: Blizzard, World of Warcraft