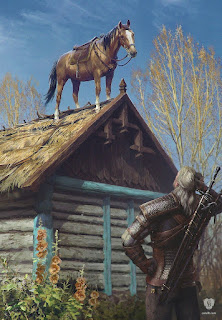 As mentioned in the New World September development update; mounts will be coming to Aeternum.  Here are some of my thoughts.

First I will admit that I was not one of the players that argued for mounts in the game.  The world of Aeternum feels small enough that even the farthest depots are not that tough of a run.  Part of what makes it feel small is that it is jam packed with things to stop and do along the way; something of interest is never more than a few steps away.  Mounts would ruin that feeling.

However, now that we've seen how BIG the new zone Brimstone Sands mounts start to make some more sense.  Before we get into what I would like to see out of mounts lets list a few things I don't want.

With the "please don't" covered; lets look at a few things I'd like to see starting with a few ideas I'd lift from other games.

The first idea I'd steal is the way Roach (the horse) works in The Witcher 3 (and no I am not talking about Roach randomly appearing on a roof -- see picture above). When you call your horse in The Witcher it appears from just off screen; no magic horse from your pants.  This obviously is difficult to pull off in a multiplayer game, but if the mount could appear from a cloud of azoth and charge towards you that'd be neat.

Secondly, the horse in The Witcher will automatically follow paths/roads and the player can basically AFK to their destination if its at the end of the road.  This would be awesome in my book; I already spend a ton of time on the roads of Aeternum and the world is beautiful so I'd love kicking back and watching the scenery pass by.

In Albion Online players can have pack mounts that can both be ridden but also can be used for increased storage as long as the player stays in range.  This would be awesome with the gathering that can be done in New World; I can just imagine an hours long logging spree without having to stop every few minutes to zip back to town.  Since we don't want mounts out in town the pack mount would just be stabled with the extra storage capacity available just like town storage.

Next I'd steal a couple features of Guild Wars 2 mounts.  First, the way you unlock mounts via in game quests and objectives is a great way to engage the player instead of just making it something they purchase.  Next progressing your mount so that it can do more and more makes the mount system in Guild Wars 2 its own entire horizontal end game progression system.  Lastly the way mounts control in Guild Wars 2 is definitely worth stealing.  Mounts in Guild Wars 2 have unique control characteristics (which can improve with leveling them up); not all mounts can stop or turn on a dime - some are slower to turn and some are faster to stop and some are slow but can bounce really high.

While we don't want the flying or "silly" side of Guild Wars 2 mounts (for example the kangaroo mount that is meant for jumping puzzles) we want the core concept that mounts are their own track of content for the player to explore, progress, and then ultimately feel like they have some skill in using rather than just being a flat speed boost.

Another idea I'd like to see mounts take on is a role in combat of some sort with the possibility for armor that gives them different abilities just like light/medium/heavy armor for players.  I don't want the combat aspects to be defining but whenever I think of mounts in games I also think of charging down my enemies, flying off the mount, and launching into an attack.  If my enemy is taking off on a mount I want mechanisms to knock them off and engage them in combat.

I am hopeful that there is some care and thought put into mounts for New World so they do not just become a visual speed boost.  They need to fit into the game just as any other system.  If we look at things like music became a tradeskill and how musical instruments fit into crafting then I'd hope to see mounts and mount accessories fit right in.  And I really, really like the idea of mounts appearing out of a mist of azoth at full gallop when called.

Posted by heartlessgamer at 8:16 PM