Call of the Wild: The Angler - Challenger Update is LIVE

The Challenger update is now out for Call of the Wild: The Angler and it brings with it updated fish behaviors, daily/weekly challenges, and numerous other improvements.  I fished a bit yesterday and wanted to give my thoughts on the changes.

I thought the first item I'd be looking at would be the daily/weekly challenges but to my surprise they were no where to be found when logging in.  No user interface notifications.  No signs posted in the main area (which is how you get most of your quests started).  It wasn't until I dug through the backpack menu (Press Q for the quick menu and then F for your backpack) that I found the Challenges tab with the details. 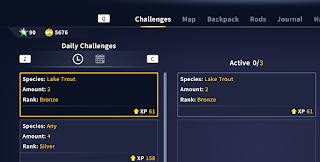 They could have done a better job telling players where this was at since its one of the key changes to help drive players back into the game.  Also annoying is you have to activate the challenges and can only have three active.  This is dumb design.  I shouldn't have to activate challenges and I shouldn't be limited in what I can complete.  Also there is no UI while fishing that tells me what I have active (but it does give you updates as you catch fish -- see screenshot).

The challenges are laid out between daily and weekly objectives and experience rewards attached.  I can't really say if the rewards are worthwhile as I already have the end game rods/reels and lures I want to use.  There is still a distinct lack of progression in the game even with these changes.  There were changes to the store as far as cost of equipment but that doesn't mean anything other than "grind" since it doesn't have much of a change in how you experience the game.

Fish behavior and animation was updated in the patch.  Fish seem to scare now and I have had multiple times where a fish ran away (fast!) from me reeling in my lure.  I have had to use a bit of finesse to catch some fish.  Also did I mention fish are fast?  I actually jumped at one Northern Pike that shot out from under the dock I was fishing at to strike my lure.  Animations are much better now as well and its great to see fish zipping about here and there compared to the old lethargic activity of the past.  Catching fish is a bit more exciting now!

While animations and fish speed are better now and there are some visual improvements to water the actual catching and fighting of fish seems the same.  The speed of fish does mean they move around a bit more when hooked but there is still no more skill involved than right clicking when STRIKE appears and holding left click to reel a fish in.  If players were looking for any sort of "challenge" to the game with this update they will be disappointed.

Over all I like the changes and its a baby step forward.  I enjoy the challenges but other than the satisfaction of completing them I don't feel there is any progression occurring.  I will still "chill and fish" in the game from time to time but there still isn't much to do with the game.  With that said they did tease us with a new Reserve possibly coming. 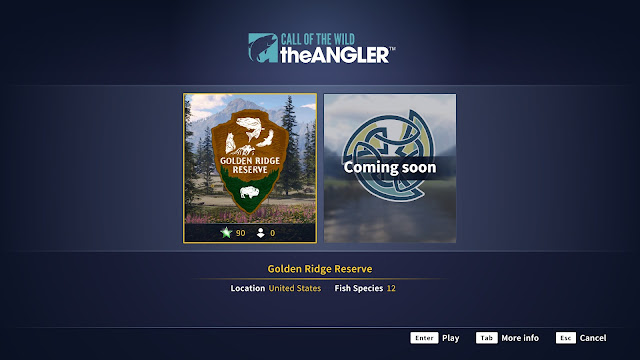 Posted by heartlessgamer at 11:55 AM