For my other impressions of Brimstone Sands 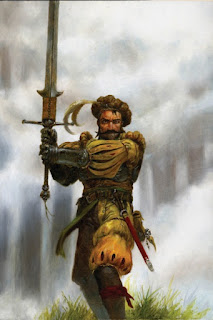 With the Brimstone Sands update the New World developers brought to the game the quintessential fantasy MMORPG weapon: big honking swords (aka greatswords).  Players can now slap overly large swords over the top of their ridiculously large great axes and warhammers to complete that anime-but-if-anime-was-in-colonial-times look.  A bit snarky, but the swords are massive and I am here with some thoughts.

First a note on the image included.  This is one of my all time favorite fantasy images.  Not only because of the honking big sword but also the entire outfit comes together in a "don't try me bro" way.  I used this image as the base for my guild recruiting poster back in the Warhammer Online days ("ask not what your guild can do for you but what you can do for your guild").  Needless to say; I'm a fan of big swords.

But I cannot tell a lie.  I have not actually played with the greatsword myself so this impressions post will be entirely from the perspective of a player getting repeatedly wrecked by them in PvP.  Spoiler: a new weapon released in New World is stronger than others!

The weapon as I understand it is broken into a stance mechanic whereby players activate and stay in a stance based on skills used.  Stances bring innate advantages and boil down to a defensive or offensive stance.  This is a unique weapon compared to others in the game and the stance mechanism is allowing it to fit into multiple play styles.  In fact I'd say it has hit the trifecta: great with light armor rollie pollies, great for medium armor bruisers, and great as a tanking weapon for heavy armor.

Regardless of stance; one thing the greatsword has going for it is mobility with players leaping and slashing their way to their opponents.  It seems whether you play the offensive side or defensive side there is a focus on mobility with the weapon.

Another unique aspect of the weapon is it scales equally off strength or dexterity where as most weapons have a primary stat they scale off of and a secondary.  This equal split approach for the greatsword means players can get a lot out of both the dex and str attributes and weapons that pair with either.  This is why I think we are seeing it paired up with everything from bow to heavy sword/shield tanks.

As far as my experience playing against the greatswords?  I have definitely learned I need to stay and fight greatswords which unfortunately is not a great proposition for a heavy armor player such as myself.  My damage is too low to get through their defensive stance and their damage is so high on offense that it shreds right through the heavy armor I wear.  I have also seen the medium greatsword/great axe bruisers dominate in 1vX situations in PvP arenas and Outpost Rush.

Speaking of heavy armor and greatsword there are some "turtle" builds popping up that make tanks look nigh unkillable.  The defensive side of the greatsword offers a ton of versatility for the defensive tank player so makes a perfect compliment to sword/shield.  At the same time it also brings the mobility and scaling off STR so feels like a perfect match.  I may have to swap it for my warhammer in my heavy frontline tank build...

As can be guessed so far by my comments the greatsword is in its honeymoon phase and is every where.  I think this is a good sign for future weapon designs that a new weapon can function across the spectrum but it does create a gap with the existing weapons that don't enjoy this sort of flexibility.  Time will tell.

What are your thoughts?

Posted by heartlessgamer at 8:41 AM