Pew. Pew. Pew. New World is nerfing individual gold gain in the latest PTR update.  As it's a bit buried in the thread here is a full copy of the text: 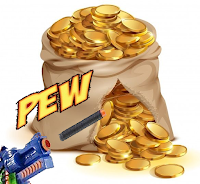 In this PTR update, we added a few economic changes which help maintain a healthy balance between coin going in and out of the economy.

We’ve seen significant increases in coin generation from economy updates in our July and October updates. With many returning players impacting our world economies, we see a need to get the balance of coin generation and breadth of rewarding activities back to healthy balance. Specifically we are reducing coins earned from Lost Sack of Coins to 250 per bag, and returning Trade Post tax to 5%, the standard in player driven marketplaces in
MMOs.

We removed Lost Sack of Coins from elite chests as the chests are very rewarding on their own now, and have chosen to make Darkness Breaches the only source for players to get Lost Sacks of coin and removed them from all chest drop tables. Tuning of the economy is ongoing in New World, and we’ll make adjustments as needed to ensure balance for long term health.

We are also correcting a trend where we’ve seen a supply outpacing demand for T5 Iron Hide, making it less valuable than other tiers of hide due to it’s excessive availability. We will be cutting the quantity per Iron hide drop by ~50%. As always we are continuing to heavily monitor the economy and will continue to work towards continually improving it and keeping it healthy!

First, I want to commend Amazon Game Studios (AGS) on the transparency in the change.  These are the sort of changes that can sneak into test servers and create chaos if not "announced" by the developers.  AGS is out front on this one letting players know and explaining the why behind the changes.

I like the changes over all even though it will hit my wallet hard (I make the majority of my money on the trading post).  Inflation (and deflation) was getting a bit out of hand lately on the legacy servers (not sure how its going on fresh start servers).  Anything that helps drive gold out of the game is a good move at this point.

With that said this is going to be a hard one to swallow as a community because we still have the Windsward/Everfall-owning companies netting millions of gold a month.  As long as these mega-rich companies exist then the top end items we are all chasing are still going to be out of reach for the average folk but laughably NOT out of reach for the rich folk (seriously 300k is no different to 500k for a best-in-slot item for the richie riches).  Nerfing individual player gold rates isn't going to change that top end problem but will put players further behind getting there as we have to spend more to just exist in the game day over day.

Is there a solution to this problem that doesn't upset the community?  Probably not.  It's needed change to fight inflation which erodes the economic foundation, but its going to cause debate in the community and put the have-nots even further against the companies-that-have-everything.  Sure there are recent changes that affected the bottom line for companies, but it also brought up other companies into the ranks of "making more gold than a company really needs".

Really the only change that will change this is to get rid of gold as a reward for territory control or spread the gold reward out to the entire faction. As long as the tax money funnels into a single company it will continue to cause problems for this game and drive changes to nerf individual gold acquisition.  Seriously if they just caused tax gold to disappear millions of gold would just poof out of existence.

In it's place could be some alternate form of currency specific to upgrading towns and forts or maybe, and I know this is crazy, something that benefits the entire faction.  Maybe I'm just crazy factions should have more of a purpose and reward for being in them?

Anyways; pew pew pew to your money bags.  What are your thoughts?

Posted by heartlessgamer at 7:00 AM