I have used Sword/Shield for the majority of my time playing New World.  I leveled up as Sword/Shield and Firestaff.  I spent a long haul playing Sword/Shield + Hatchet when leaping strike + shield bash was the king combo build.  I have most recently done a bunch of tanking in PvP and a bit in PvE using Sword/Shield.  So it came much to my surprise to learn there was a round shield, Motherwell Wisher's Coin, that had the Rogue perk (increases backstab damage).  More curious was what was required to farm for it!

The shield drops from Well Guardian inside of the Motherwell.  Players that played at launch may remember the original version of Well Guardian tied to the main story quest line and it's millions of hit points creating an excessively long and exhausting fight (which meant players just exploited terrain to spank it to death).  Well Guardian was brought down to normal hit point levels appropriate to its position in the quest chain.

Well Guardian also features some named item drops which now always are a minimum of 590. As mentioned one of those drops is the round shield with the rogue perk.  The only problem now though is that players cannot enter the Motherwell after having completed the quest.  In comes the creative players who always seem to find a way around these sorts of inconveniences.

Through some creative jumping and crawling a player can make it back into the Motherwell and farm Well Guardian.  If interested you can follow this guide on Youtube.  Then it's just down to farming Well Guardian over and over and over and over (as is MMO tradition!).  I would recommend bringing Blight Tinctures with you as you will get blighted (damage over time and healing effects significantly reduced) and while Well Guardian is a shadow of his former self he still can smack around a level 60 (got me one time).  Some spots on the rock wall will save you from blight but best to just bring tinctures (I bought a stack of 100x powerful tinctures for a few hundred gold).

As a note I had +luck on my bags (x3), no luck on my armor/weapons, and 3x major loot trophies in my house.

Fifty or so kills later and voila! 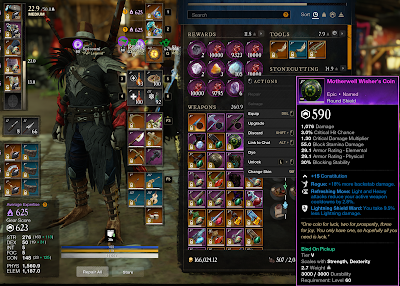 Well guardian also drops these named items (I got several of each before I got the shield):

Posted by heartlessgamer at 4:40 PM