The authorities uncovered this found footage in the forests of Aeternum.

The details of this case was never disclosed to the public.

I journeyed out and slayed my daily quota of turkey.  I found it interesting that there are weapon coatings that do extra damage to Turkulon (the giant monster turkey) instead of just giving us a use for all the "beast" related items (coatings, ward, bane).  The boss turkey is also not a challenging fight so not sure why players would need the extra damage from the turkey coatings. 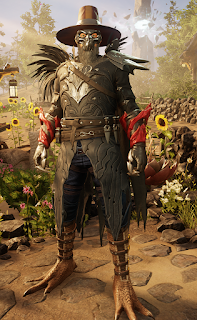 As far as rewards there is a new armor skin for your boots that replaces your feet with turkey feet.  I absolutely love this skin (see image at right).

Also available is a turkey-specific skinning knife which gives event items when you skin regular turkeys such as the the aforementioned turkey-specific weapon coatings and also is the current way to get your daily diamond gypsum.

Probably most important though is the Feast-o-Plenty Food Trophy that increase food buff duration.  A trophy obtained from the mighty Turkulon, Feathered Avenger of Death. It inspires you when you eat a meal.  Only works when placed in your home.  Grants +25% Food Buff Time when you eat beneficial food.  I have yet to unlock the trophy but it is definitely a reward worth working towards!  It also looks like you can only gain one copy of the trophy during the event so no stacking to 75% through 3x trophies.

There is also the giant turkey legs and the recipe that goes with them to create +Luck/Con food.  The big change though is everyone that contributes to the giant turkey kill gets a leg compared to last year where only the person that skinned the turkey got a leg.  Legs and this +Luck food will be a hot commodity!

Most refreshing is there is a pity system so if you don't get a specific reward you will be guaranteed to get it on your 16th Turkulon kill.  It took me about an hour to get five kills in today and that was mostly just waiting for spawns while I did other daily tasks.

Over all the event is light weight and fun.  The Turkulon fight seems either bugged or it is undertuned (i.e. its easy).  Players who want the rewards will be able to get them and still enjoy other parts of the game.  Another great event in the bag for New World!

Fighting Turkulon and have different opinions of the fight?  Think the rewards are dumb?  Maybe brilliant?  Let me know in the comments.

Posted by heartlessgamer at 12:46 PM