For my other impressions of Brimstone Sands

Heartrune? Heartgem? Runegem? Runeglass?  Apologies if you are confused as the names of the new heartrunes and runeglass gems sound similar and changed names during the testing period.  The Brimstone Sands update for New World brought some new toys to the end game.  Here are some thoughts on each.

First we have the heartrunes (aka heart gems).  These runes grant players an extra ability to use alongside their weapon abilities which means a player has a fourth active ability at any given time.  They can be thought of as an ultimate ability as there is a charge up period before the rune can be used.  They are a neat concept and bring an extra layer of diversity to players without giving a strict power increase. 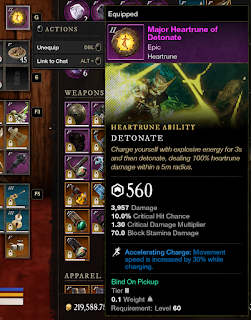 Heartrunes can also be upgraded to give them perks for different effects (more damage, slow enemies, etc).  It is not readily apparent in game they can be upgraded but like many end game activities in MMORPGs the information is available on external websites.  The upgrades do require players to first acquire the minor version of the heartrune which are currently all part of expeditions; either dropped from the last boss or crafted via materia.

The materia crafting cost, 8,000 per minor rune, is pretty dumb as 99.9% of players will unlock it via completing the expedition long before they ever get to 8,000 materia.  I have no idea where they came up with this number for crafting from materia so I hope it changes otherwise the recipe should not exist.

Another issue I find with the upgrade process is the materials required for each are all over the board in what they require; with some requiring a new "writ of adventure" which you get from faction vendor (20,000 freaking tokens) or Brimstone Sands quests.   As far as I can tell these writs only go into those five specific rune upgrades.  I am not sure we needed yet another legendary crafting component; especially one that costs that freaking much.

The legendary upgraded versions of the runes bring a lot of variety and I can see using multiple different ones on my different builds.  There is a stoneform for defensive builds, vining to slow players down, and any number of buff/debuff in between.  There is also the standard "do damage" runes which is a bit unfortunate as I'd of hoped the runes would stick to utility and not just adding a damage ability.

I do have a concern that the detonate (big bomb damage) is the "go to" for your average player.  I can see where the developers maybe wanted it to help break up clumps in modes like war, but while detonate is a great clump buster it is also just an extra damage spike tool that favors light armor DPS rolling all over the place killing things.  Especially with the brutal upgrade where you get higher damage but take more damage while charging; which means light dodge is basically required so you can dodge into your target right as it explodes.

So far in Outpost Rush it very much seems like detonate is the go to.  I have died more to it than any single skill I can remember.  The animation is also terrible in groups; you have no realistic idea if its your teams or the enemy teams detonate and if you are detonating its difficult to see if your opponent also starts a detonate.  Ideally detonate would result in your own death (i.e. you are blowing yourself up), but its just another big damage spike ability.  Sigh.

Enough about heartrunes.  The other toy added was runeglass gems.  These new gems are used to slot into equipment the same as regular gems but bring small advantages over the regular gems.  For example; punishing runeglass brings extra damage to any gem type.  The advantages are small enough that it's not game breaking even when stacked on all gear.

The only downside is the runeglass cases are super expensive to craft and thus won't make much sense on PvE gear that requires constant gem changes for mutations.  They will also make top end PvP gear that much more expensive exasperating the problem of best-in-slot PvP gear being too expensive and limited to the big companies with the big gold piles.

Some ideal changes for runeglass gems would be letting you take them out of gear so you can use them again or maybe you can slot regular gems over the top of them and swap back to the runeglass later; this way the runeglass is more permanent while regular remains dispensable.  Also maybe dial back the crafting requirements and/or make the unique materials available in more than just Brimstone Sands.  I already dread that I am going to be putting a 30,000 gold gem in my 15,000 gold weapon or 5,000 gold armor.

Heartrunes and runeglass gems bring something for players to invest time and energy into and while offering some power creep to the "haves" vs the "have nots" it is not enough to break the game.  This is a good move in the direction of horizontal progression instead of strict vertical progression.  With a few tweaks to be friendlier to players they will offer a lot of options.  Without changes they will be longer term goals for many players.  Either way I like both and think they are a good addition to the end game.

Posted by heartlessgamer at 2:18 PM