Call of the Wild: The Angler Multiplayer Woes

The multiplayer system in Call of the Wild: The Angler does not work and is poorly designed.  It should be the top priority for the development team to fix and make fundamental changes to.

The multiplayer mode in CotW: The Angler allows up to twelve fishergamers to drive, boat, and fish together on a single map (known as a reserve in the game).  Unfortunately the "join friend's game" does not seem to work as I have yet, after dozens of times trying, been able to join a friend's game.  In fact most of the time the game doesn't even represent the online/offline status of friends correctly (usually saying they are offline when they are online playing).  The "join game" option on the friends list does throw an error at the user though and then connects to an online map anyways.

More irritating than "join friend" not working is the mind boggling decision that random match making
online multiplayer would be defaulted to ON with no option to have friends-only or private sessions.  To top it off the setting for turning mutliplayer off does not save properly so every time you launch the game you have to remember to go turn it OFF again.  Fortunately there is no chat or way to communicate with other players in the game so right now there is no risk of getting spammed or told something that would make my mother blush.

Defaulting to ON may seem harmless, but it can mess with the new player experience.  What I ran into in my first fishing trip is that I couldn't do the boat driving 101 or driving 101 because another player had spawned a boat or vehicle and it wouldn't allow me to spawn another from the same terminal.  Also since we were all playing right at the launch of the game I have no doubt some of my early frustrations not being able to catch fish in the beginner spots for the tutorial was directly because a dozen other players fished the area out (which is a real possibility with how the game works in populating fish in the world).

Anyways; it is 2022 and there is no reason to be defaulting players to multiplayer match making with random strangers unless that is what they explicitly want to do.  I do not understand why the system does not work exactly like Expansive World's other game theHunter Call of the Wild.  In theHunter you have to actively turn your map into a multiplayer session and then you can control if its public or friends only.  It is just baffling that the Angler went with random match making turned on and provides ZERO options for setting up a friends-only session.

Other improvements needed in multiplayer.  Voice or chat communication is a must have if there is going to be random match making and public servers.  Ideally we'd also get the "search for available games" browser available in theHunter so we can find games (especially important when new maps launch).  There also needs to be away to share your catches with others nearby or over chat.  How am I supposed to brag about that monster I just landed?   I guess I'll just lie about the catches like I do in real life.

At least it is neat to see other players fishing. 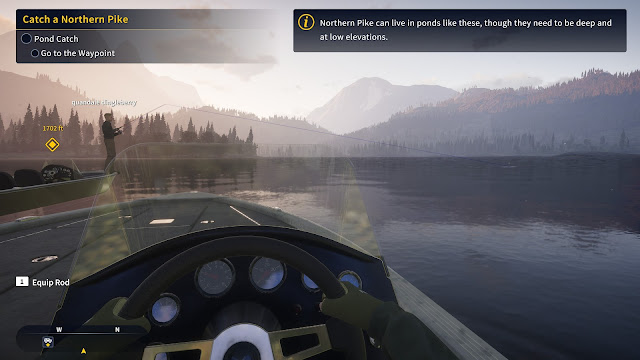 Posted by heartlessgamer at 1:19 PM