Woe is me as I post back to back days about online multiplayer woes.  Today I want to zero in on the New World server woes.  Ultimately for the game it is a good problem to have.  Player numbers are on the rise and more and more folks want to get in and rejoin in the fun.  However, for some of us that stuck it out when there were a bunch of empty low population servers it is a bit frustrating to now be stuck in login queues night after night severely limiting playtime.

Some quick back story for anyone that hasn't followed New World's trajectory.  When the game launched last year it blew away expectations peaking at over 900,000+ concurrent users.  Amazon Game Studios (AGS) quickly expanded available servers and before we knew it each region had hundreds of named servers.  That peak concurrent user count dropped like a rock and as quick as the servers filled up they atrophied to the point where some had single digit concurrent players (which were likely bots abusing the empty server to gather materials without competition).  AGS responded and merged servers.  Towards the end of the merge cycle regions like NA East were down to just four servers.  Four very full servers.

Full servers are great for New World as there is no cross-server play and when I was playing on the Pluto server pre-merger I went weeks/months without being able to play certain content that required more players online.  Post-merger there are enough players that any group content is easily accessible because there are always players.  About the only negative game play effect of a full server is competition for gathering nodes but that has been much improved with more nodes available than ever before (personally I am also fine with the limited influx of gathered raw resources coming into the economy).

What full servers are not great for is logging in and playing as players get stuck in a queue for 30+ minutes (and don't get me started on crashing after a couple minutes of playing and having to go back to the queue).  With recent changes to the game and buzz around the upcoming October patch (bringing a new zone, expedition, weapon, and a bunch of other changes) the player populations are spiking back up.  New World has gone from a peak of 15,000 concurrent players to 40,000+ and the login queues came with them. 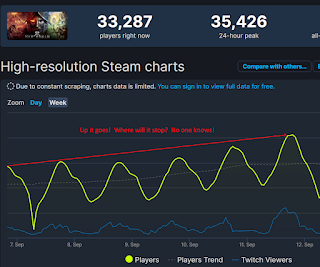 AGS did add a couple new servers and increased server population caps (2000 increased to 2200 for most servers and 2500 for some servers as a test).  This has helped but there are still 30+ minute queues for my server at peak times and I am NOT interested in paying for another server transfer to get to the new server that isn't at cap yet.

The current situation also has me worried about what October will bring when the big patch hits.  As noted we are already seeing increased interest just from the word-of-mouth about the patch and it is still a month away.  I am sure we will see a dip before the patch but then I fully expect a huge swing of players coming back for the patch.

Those players coming back are going to find their characters merged into the few servers so their return will clutter the login queues further.  Players, like myself, who waited out low population servers and have stuck with the game through the decline and now rise are being punished for that loyalty.  Ideally AGS would have set it up so that as players return and find their previous server merged they would be funneled to newly created servers vs creating problems for those of us that have been active through the thin side of the thick and thin.

I am not confident players are going to stick long term after the October update.  I anticipate seeing a higher regular player count for a while, but there will be a boom and bust for the October patch; especially with the major streamers that will bring 10,000+ players to peak times on some servers.  The bust said of that is going to be more frustrating if there is a boom in servers that then have to be merged back down.  I firmly believe there is fatigue related to merges which is why AGS waited so long to merge the low population servers (it took them months!).  Also AGS is clearly gun shy adding new servers now.

My end hope is that as AGS navigates New World through these peaks in interest that one of their top priorities is to figure out the quagmire that is the server model in today's gaming world where a single streamer brings a 10,000+ player army with them.

New World is still one of the most fun MMOs I have played in years and is continuing to deliver on the promise.  These ups (and the downs before) won't scare me away but the frustration piles on past frustrations so over time is cumulative frustration.  At some point I will be done with it so hopefully AGS has a plan before then.

Posted by heartlessgamer at 4:56 PM