Games Made Me: InQuest Gamer Magazine 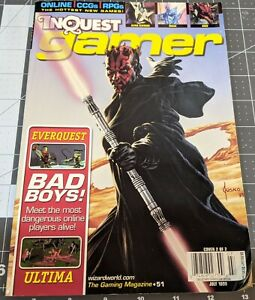 Games Made Me is a series of posts where nostalgia gets the best of me and I dip into my gaming past for things that have made me the gamer that I am.  One of those items was InQuest Gamer magazine.  InQuest Gamer started in 1995 and ceased publication in 2007.

InQuest felt like it was tailored for me as a gamer.  It covered the range from board games, to collectible/trading card games, and then into the realm of MMORPGs.  The magazine grew up through the early days of Internet gaming (aka the golden era of MMORPGs with Everquest and Ultima Online) and overlapped the rise of games like Magic the Gathering and Pokemon.  As a young gamer I could ask for nothing more.

My journey with InQuest started when I was working at a grocery store and the magazine caught my eye on the rack.  It hooked me and I was mailing out one of the cards for a subscription the same day (some of you young folk may be surprised to learn we had to write on a piece of paper and put it in the mail to get things done).

While I was mostly interested in the coverage on games like Magic the Gathering (MtG) and the Pokemon TCG which InQuest covered in detail the magazine also became my primary vector into news and information about some online games called Ultima Online (UO) and Everquest (EQ).  At the time our potato of a home computer could handle running text MUDs (multi user dungeons), but games like UO and definitely any sort of 3D game like EQ were out of the picture.  Fortunately, there, in full color and glory, were stories from these online worlds for me to enjoy in InQuest Gamer.

The articles, like the Bad Boys article featured in the magazine cover above, warped my mind about the possibilities of online games (so much so that over 20+ years later I still remember reading them!). The Bad Boys article covered a player from UO and one from EQ.  The UO portion focused on a player named Redkiller that hunted down red players (aka player killers) to protect their player built city while the EQ portion covered a player talking about the big bad dungeon and losing their stuff in it's depths.  To be honest, hunting down players who killed other players and managing a player built city, sounded way cooler than fighting in a dungeon.  I've been a PvP focused gamer ever since.

Reading the tales of Redkiller in that Bad Boys article convinced me that I had to play Ultima Online and the moment I had the chance to buy a non-potato computer for myself I did so and a short trip to GameStop and I had a copy of Ultima Online (which I still have that box and materials today - except the cloth map).  My gaming existence has never been the same.

InQuest Gamer magazine made me the gamer I am today.

Posted by heartlessgamer at 10:39 AM

Email ThisBlogThis!Share to TwitterShare to FacebookShare to Pinterest
Tags: GamesMadeMe