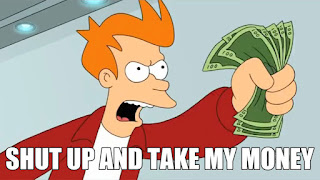 Getting back into blogging (apologies for missing yesterday for my post a day commitment) has also had me reminiscing through my 17+ years of posts.  I stumbled across This is WHY Free 2 Play works, quote from Pirates of the Burning Seas team today and it got me thinking.  I find it odd how, as a gamer, I jumped in to defend a company making money.  More odd is I still hold to this line of thinking.

It took me reading a few posts to wrangle what my younger self held as opinion on the topic of business models for games, but here is my "years later" assessment of that journey.

With that last bullet I am going to hop off the autobiography train and focus on "games are a business and have to make money first".  In my older age I find this really odd as a position for a consumer of a product to take, but as a gamer who really-really wants to see my niche of games (MMORPGs) have new options to try.  Basically I want to "vote with my wallet" for games that I want to be successful or from developers I want to be successful.

Speaking of "voting with my wallet" that brings us back full circle to business models.  In the subscription model players have a single vote; my vote counts the same as yours -- either I am a subscriber or I am not.  In a micro-transaction model each player's vote is variable.  A player in a free 2 play game may abstain from voting by just playing for free or a player may be a whale

There are so many issues with this.  The biggest problem of video games making money is that it preys on human weakness.  For some of us it's just a case of "I have more money than time so I want to buy my way ahead or buy things that are fun", but for others it preys on impaired decision making (children, addiction, FOMO, etc) and works to extract maximum cash.  Yet, I still defend that a game is a business first and has to make money.

To the post I kicked this off with on why free 2 play works (which is really to say micro transactions work) is that it does let players invest at their level so developers/publishers can maximize per-player return. I do still believe as I mentioned in that post that good game design can keep the playing field level.

At the simplest level for my argument are the games that "just sell cosmetics"; games like New World where after you buy the game you can play for free (no subscription) but then there is a store that offers all sorts of goofy outfits and stuff to put in your house; none of which affects power level when playing.  If you really like and want to support the game then drop $50 on the store, but there is no requirement to do so.

In the more complex category are games with things like battle passes/premium/season pass (for my purposes just called battle pass).  I think battle passes came from a marriage of game design and business model.  For many games battle passes offer unique rewards and drive players to participate in the game in a certain manner.  Good game designers marry battle passes with great game play and it's a great experience.  Every time I jump back into Apex Legends I snag the battle pass and it is worth it.  In Guild Wars 2 I've bought multiple living seasons (which are battle pass like).  Battle pass is the modern day subscription, but this time around players get a benefit.

Of course there is the opposite end of this where battle passes are required to make any meaningful progress and the entire game is designed to get you to pay up.  This is where I start drawing the line as it falls into an area of abusing players.  This is basically why I don't play any mobile games; every single one I've ever looked into, while looking fun, are just designed to make me depart with my cash.

In conclusion: I support game companies making money and I believe good game design can go hand in hand.  It is important to keep this in mind when looking at future games; the sooner they outline the business model the more likely it is the game design will support it in a positive manner.  The later a game decides on it's business model the more likely it is to be abusive and/or insufficient to be successful for the game.

Want me to review more of my old posts?  Want to argue with me?  Leave a comment.

Posted by heartlessgamer at 10:40 AM